Research Article
Diabetes Risk Susceptibility and Predictive Ability of the Finnish Diabetes Risk Scoring Tool in a Rural Young Adult Nigerian Population
Background: The burden of diabetes mellitus is increasing across the globe.
Objective: This study was aimed at identifying at-risk individuals and determine the performance of the Finnish diabetes risk scoring (FINDRISC) tool in a rural Nigerian setting.

Conclusion: FINDRISC performed poorly in this rural population with a female preponderance of risk factors and risk status for diabetes mellitus.

Keywords: FINDRISC, Diabetes risk, Young adult, Rural, Nigeria
INTRODUCTION
Diabetes mellitus can be described as a silent killer because the disease usually remains undiagnosed for a long time. It has been reported that over 50% of those living with diabetes are undiagnosed [1]. The implication of this is that until major complications of the disease arise, these persons who are living with the disease remain unaware of their status. Nephropathy, neuropathy and retinopathy are some of the long-term macrovascular and microvascular complications that are commonly associated with the disease thus making diabetes management quite challenging [2].
Generally, health care and routine testing is not prioritized in most developing nations of the world. This explains why the burden of diabetes is quite enigmatic in these nations, as the disease is currently ravaging menacingly and stretching their already dysfunctional health care systems. Sadly, Nigeria is badly affected by what can be considered as a multiple tragedy of increasing prevalence of diabetes, increasing number of undiagnosed cases, lack of awareness and poor health care. This, in addition to a low quality of life amongst patients amply justifies the need to stem the tide of the disease.

Uncontrolled diabetes commonly manifests as elevated blood glucose level leading to significant damages to vital organs [3]. This is often preceded by prediabetes which may be considered as an incipient stage of type 2 diabetes
mellitus that may be reversible with necessary lifestyle modifications, thus making it a potential target of efforts aimed at reducing the burden of diabetes. Additionally, the identification of individuals at risk for diabetes can be achieved via risk scoring. Diabetes risk scores are cheap, non-invasive tools for assessing the likelihood of developing type 2 diabetes mellitus over a defined period of time [2]. One of such risk scores is the Finnish Diabetes Risk Score (FINDRISC) that was developed in Finnish cohorts for the identification of individuals at high risk for type 2 diabetes mellitus based on a 10-year prospective data [4].

METHODS
Study Design: This was a cross-sectional community-based study carried out amongst young adults (aged 15-35 years) in Igbodo, Delta State, Nigeria to determine the diabetes risk susceptibility and performance of the FINDRISC tool in young adult Nigerian populations.

Recruitment of Participants: Male and female participants were recruited by convenience sampling and the study protocol was thoroughly explained to them. They participated willingly in the study and filled the FINDRISC questionnaire after signing the informed consent form which was designed in accordance with the guidelines of the research ethics review committee of World Health Organization.

Exclusion Criteria: Potential participants were excluded from the study based on any of the following conditions: a prior diagnosis of diabetes, a fasting blood glucose ≥ 126 mg/dl (≥ 7.0 mmol/L), current use of prescribed drugs or diets for the control and management of diabetes, pregnancy, drug addiction, physical disability that impedes anthropometric measurements as well as a decline of consent.

Sample Size: The sample size was determined using the formula of Vaughan and Morrow [7].

N=PQ/(E/1.96)2
N is sample size
P is maximum expected prevalence rate of diabetes mellitus
Q is
E is margin of sample error tolerated in percentage (5% being the maximum accepted value)
With a 4.5% error margin and a diabetes prevalence rate of 5.4% in Delta State, Nigeria [8] a minimum sample size of 97 participants was recommended. However, the sample size was increased to 200.

Blood Pressure Measurement: Blood pressure measurement was done by trained personnel using a blood pressure measuring device (Omron M2 Eco, Hoofddorp, The Netherlands). The participant was made to relax without any distractions, for at least 5 min and remained in a sitting position. Participants had three separate measurements after an interval of 2 min and the average of the last two measurements was eventually recorded.

Blood Sugar Measurement: Fasting blood sugar measurement was preceded by an overnight fast of 10-12 h. On confirmation that the fasting period has been accomplished, the participant was thumb-pricked using a sterilized lancet. A drop of blood was tested on the glucose test strip using a standard glucometer (Accu-Chek Active, Roche Mannheim, Germany).

Outcome: The outcome of interest was prediabetes; an intermediate state of hyperglycemia that signals diabetes susceptibility. Prediabetes was defined according to the latest American Diabetes Association (ADA) criteria [10] but slightly modified such that the lower cut-off value was lower than the ADA recommended cut-off. Participants with impaired fasting glucose, i.e., FBG ≥ 90 mg/dl (5.0 mmol/L) and < 126 mg/dl (7.0 mmol/L) were considered to have prediabetes. Thus, hypoglycemia, normoglycemia and hyperglycemia were defined according to the definitions adopted in a previous study [2].

Statistical Analysis: Statistical analysis was done using Statistical Package for the Social Sciences (SPSS) version 23.0 (SPSS Inc Chicago IL). Descriptive statistics were expressed as Means (Standard Deviation) for continuous variables and as proportions for categorical variables. Chi-square (for categorical variables), t-test or one-way ANOVA followed by Duncan test (for continuous variables) was used for comparison. The receiver operating characteristic (ROC) curve was obtained by plotting sensitivity and 1-specificity on the y-axis and x-axis, respectively. The area under curve (AUC) and optimal FINDRISC cut points were determined. 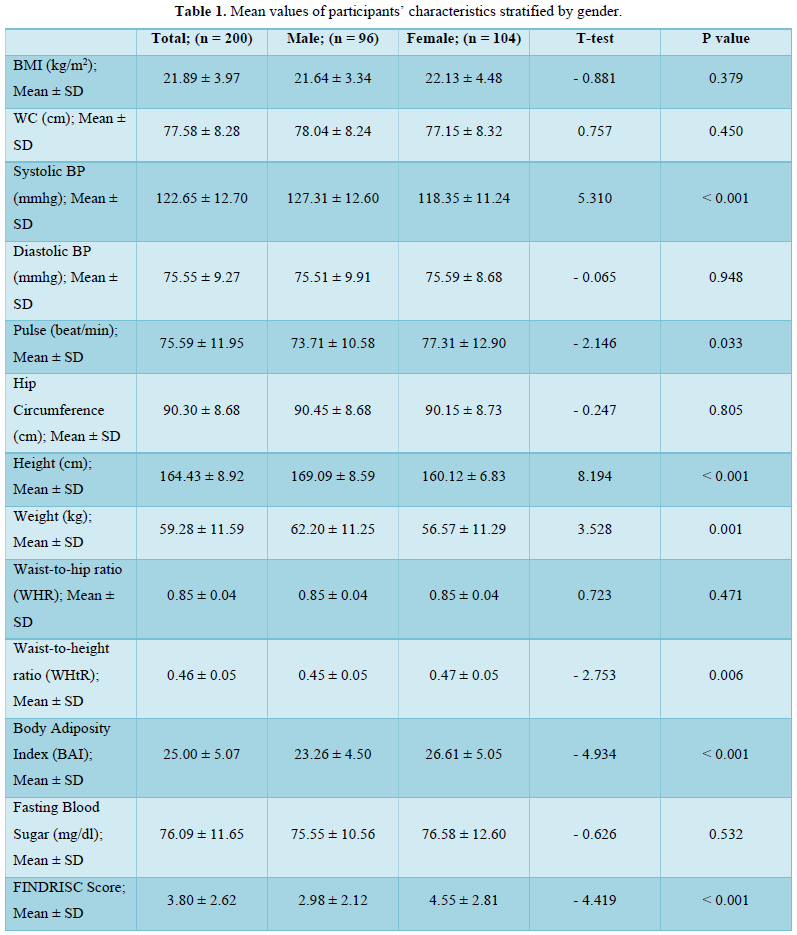 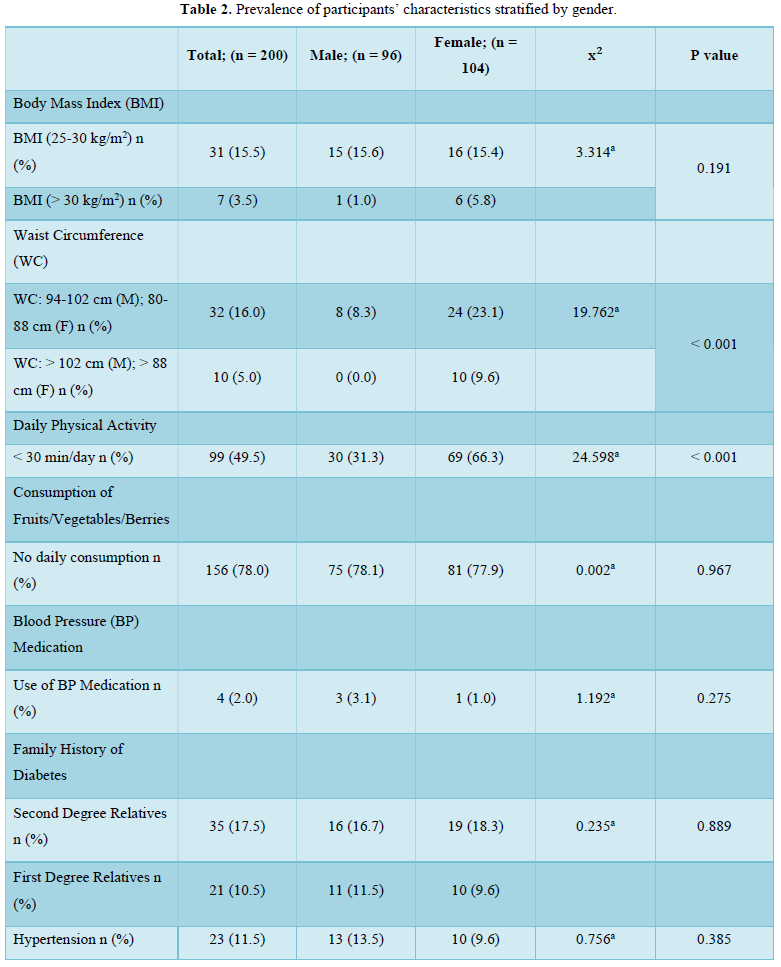 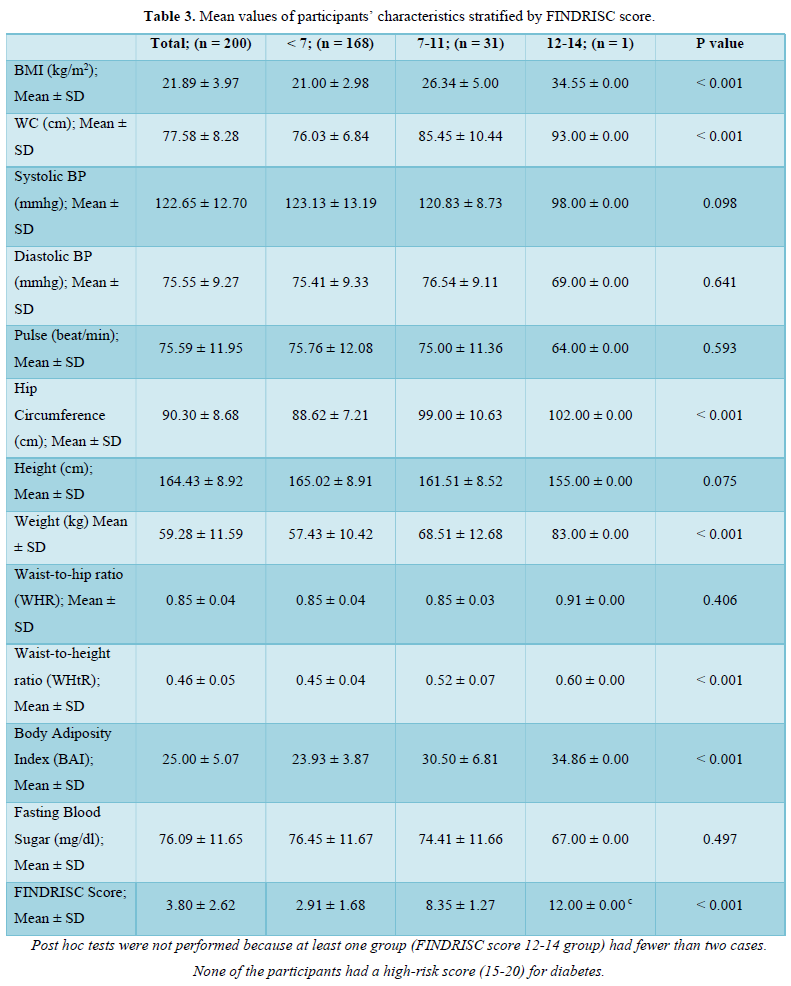 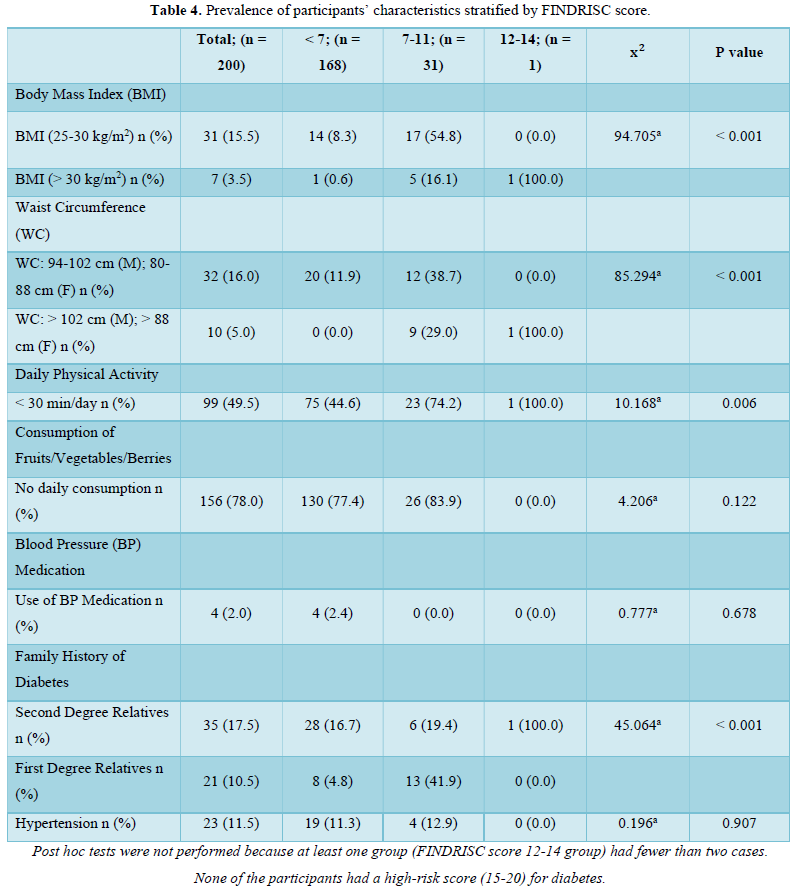 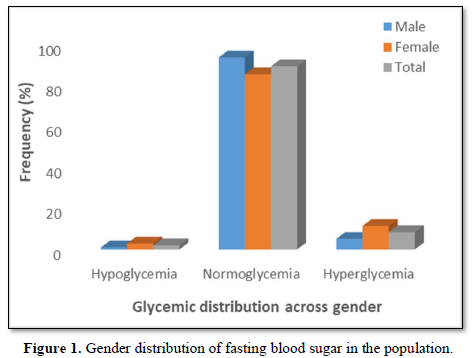 Low risk status was more prevalent in males (92.7 % vs 76.0%) relative to females in the population. Although therewere no high-risk participants in the rural population,females had a higher prevalence (24.1 % vs 7.3 %) ofparticipants with either slightly elevated or moderate risk ofdeveloping diabetes relative to males. (Figure 2). 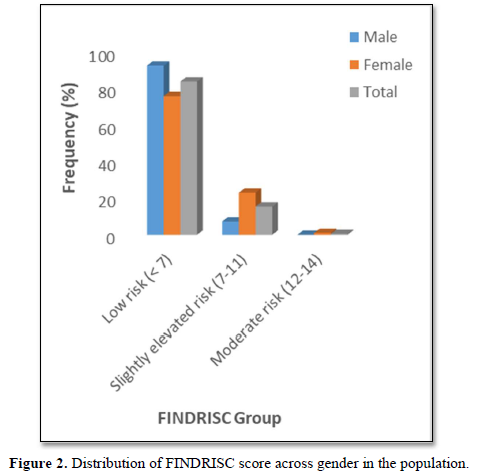 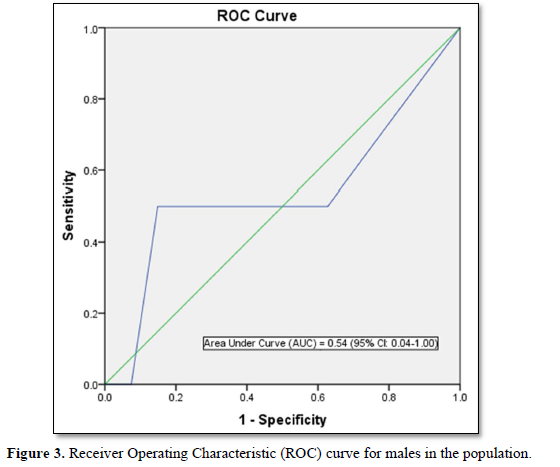 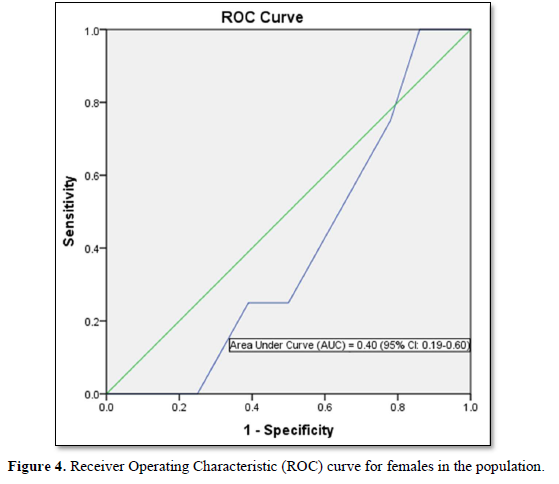 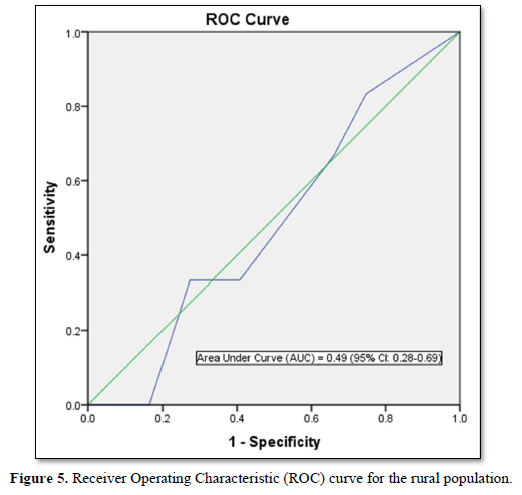 Furthermore, the optimal cut points in the ROC curve which maximizes the sensitivity and specificity of the test was determined (Table 5).

The higher prevalence of overweight and obesity in female participants is a recurring decimal in Nigerian populations [19,20]. This may not be unconnected with factors such as lack of physical exercise, involvement in less strenuous and physically tasking activities, poor participation in sports due to cultural and societal considerations [21] as well as gender differences in metabolism and hormonal balance [22,23]. This justifies the significantly (p < 0.001) higher prevalence of a lack of physical activity in the population (49.5 %) with a higher prevalence in female participants (66.3 % vs 31.3 %) compared to the male participants in this study. Generally, urbanization is associated with a drastic decline in the rate of physical activity while a preponderance of sedentary activity is associated with a higher risk of overweight and obesity [24]. Clearly, this urbanized sedentary lifestyle is gradually becoming evident in rural settings. This presents a double jeopardy specifically for the young adult females in the population since excess weight and a lack of physical activity are important non-genetic factors responsible for the increasing cases of diabetes mellitus [25,26]. Additionally, it is worrying that, the 66.3 % prevalence of a “less than 30 min of daily physical activity” amongst female young adults in the study population is higher than the 38.5 % prevalence reported amongst civil servants in South-Eastern Nigeria [25] and 11.6 % reported in an earlier study in Kaduna [27]. The fact that a lack of physical activity is a risk factor for type 2 diabetes mellitus [28] and a reduction of sedentary time via physical exercise can improve lipid metabolism and blood glucose control for the prevention and treatment of type 2 diabetes related disorders provides a valid basis for concern [29,30].

The prevalence pattern of these components is summed up in the overall risk profile. It follows that participant in the highest FINDRISC score group (FINDRISC = 12-14) in this population had the highest prevalence of risk factors. Although there were no high-risk participants, we however found that 16.0 % of the participants had a slightly elevated or moderate risk of developing diabetes with a female preponderance (24.1 % vs 7.3 %) compared to males. The absence of high risk in the population is suggestive of a reduced number and prevalence of risk factors. However, the high prevalence of slightly elevated or moderate risk of developing diabetes in the total population and specifically in females demand attention.

Although a previous diagnosis of diabetes is a high scoring component of the FINDRISC tool, we had a valid reason to exclude participants who had diabetes at baseline since the FINDRISC tool is aimed at predicting the risk of developing the disease. It is our considered opinion that there is no predictive utility derived from using a predictive tool for the prediction of an already existing condition. Indeed, using “a previous diagnosis of diabetes” as a predictor of the development of diabetes cannot be considered as a logical approach for identifying individuals at high risk for developing the disease [33]. Moreover, it has been clearly stated that cross sectional studies in which risk factors are determined in a population involving participants with and without diabetes are methodologically flawed since characteristics of people with diabetes commingle with risk factors in people without diabetes. Consequently, such studies are incapable of clearly proving that a putative risk factor predated diabetes onset [34].

Since the FINDRISC tool was developed in Finnish cohorts, it needs to be validated in any target population using AUC of receiver operating characteristic (ROC) curves [35,36].

FINDRISC performed poorly in our study population with an AUC value of 0.49 (sensitivity 71.9 %; specificity 59.2 %) in the overall population, an AUC value of 0.54 (sensitivity 60.0 %; specificity 76.4 %) in males and an AUC value of 0.40 (sensitivity 63.6 %; specificity 60.5 %) in females. The optimal cut point was 5.5 in the overall population and male participants but 6.5 in the female participants. Generally, FINDRISC does not perform well in the diagnosis of prediabetes relative to undiagnosed type 2 diabetes mellitus and metabolic syndrome [37,36]. Our values are lower than the AUC values of 0.85 and 0.87 values in the 1987 and 1992 original Finnish cohorts respectively [4]. The AUC values of this current study implies that FINDRISC may not be accurate in the prediction of future diabetes risk in this particular young adult rural Nigerian population. Due to disparities in population characteristics, there may be need to validate the tool in other age groups, even in the same location.

Although our population size was not large enough, we avoided selection bias. Our sample population was fairly divided between males and females in the population. Thus, gender differences did not bias our study.

Furthermore, our choice of participants is a novelty. We studied a previously un-studied population; apparently healthy young adults, who are previously considered to be outside the at-risk group for diabetes risk assessment. We consider them to be without any chronic health complications or predisposing underlying ailments.

The FINDRISC tool performed poorly in risk prediction in the rural population. We found significant gender-based differences in the prevalence of risk factors and risk status for diabetes mellitus. Although diabetes risk susceptibility was low in the rural population, there appears to be a preponderance of risk factors and a higher risk status in female participants.