Research Article
The Preventive Effect of Artemisia Campestris Infusion Against Hepatotoxicity
Background: Hepatic diseases and intoxications are of great incidence and threat human lives. Some hepatic pathologies are till now untreatable but could be prevented.

Objective: This paper aims to evaluate the protective effect of Artemisia campestris as diet- supplementation against hepatic disorder.
Experimental Design: Hepatic toxicity was induced by CCl4 i.p. injection (0.5 ml/ rat) in three groups: G2 (non-treated), and G3 and G4(treated by oral intake of the plant infusion at doses of 10 g/L and 50 g/ L, respectively). A fourth group (G1) was kept untreated and served as sham negative group. The chemical properties and anti-oxidative potential of the infusion were determined in vitro. Selected hematological and biochemical parameters and the histological features were analyzed. The hepatic-MDA concentration was also determined.
Results: Chemical analyses showed the richness of the plant in flavonoids, polyphenols and tannins. The daily oral intake re-established CCl4-induced tissular damages and hepatic enzymes status. The infusion showed significant scavenging potential of DPPH and induced significant decrease of MDA levels in comparison to G2 group.
Conclusion: Our findings approve the preventive effect of A campestris against NAFLD and might be used as dietary supplement to treat the disease. Its mechanism of action involves anti-inflammatory and anti-oxidative pathways.
Keywords: Artemisia campestris, Infusion, Diet supplement, Liver intoxication
INTRODUCTION 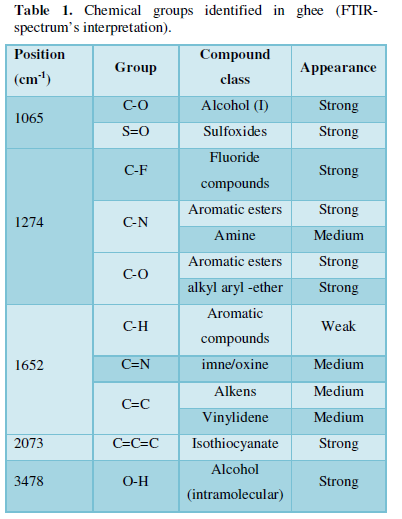 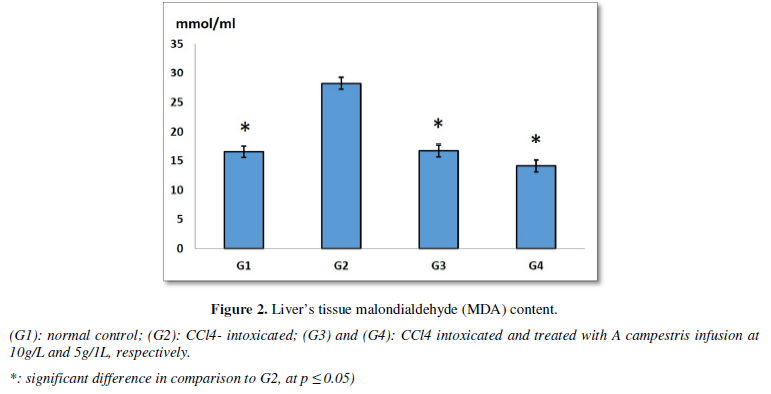 The hematological analyses showed that CCl4 single injection to rats induces significant increase in white blood cells count (7.76±2,58 103/µL), in comparison to sham group (6,98 ±1,99 103/µL). This augmented number of WBC was fully reestablished by the oral intake of the infusion (5,62±2,51 103/µL and 5,22±1,62 103/µL, respectively for G3 and G4). Furthermore, there was relevant decrease (p < 0.050) in hemoglobin concentration, platelets count and hematocrit following the intra-peritoneal injection of CCl4. Almost of these perturbations returned to the normal range when rats received the infusion by oral administrating at the two chosen doses (Table 2).
Similarly, the oral intake of the herbal infusion induced significant diminishing of the hepatic enzymes’ levels in comparison to CCl4- treated rats. In fact, ALAT and ASAT levels were of 63.24 ± 12.03 UI and 202.60 ± 15.07 UI in G3, respectively; and 59.04 ±09.37 UI and 155.08 ± 15.74 UI, respectively in G4. These values were comparable to which of the normal control, but they were Higher in G2 (78.22 ± 14.75 UI and 361.10 ± 24.86 UI, respectively). Blood nitrogen urea and total bilirubin concentrations were also elevated in CCl4 -intoxicated rats than in the other groups (Figure 3). 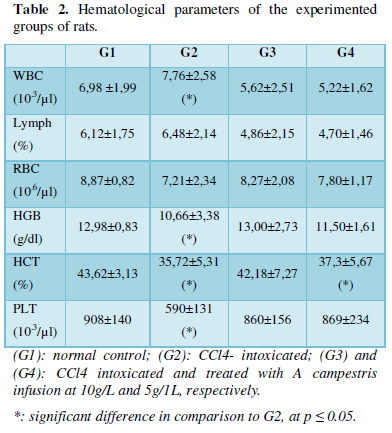 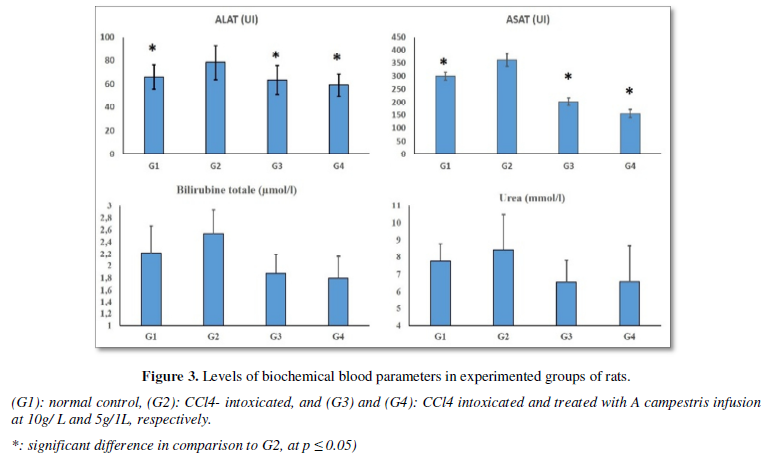 Figure 4A (x 100 magnification) shows cirrhosis with hepatocytes desegregates (cirr) in rats receiving only CCl4 by intraperitoneal injection (G2). The oral intake of the herb’s infusion significantly ameliorates the CCl4 induced damages, both at 10/L (G3) and 50 g/L (G4). These later presents nearly a normal hepatic feature as the control group (G1). At higher magnification (x400), the sinusoidal zone (Figure 4B) presents prominent ballooning of hepatocytes that originates from fat deposition in G2. This ballooning was diminished in G3 and approximately absent in G4. Furthermore, there was hepatocellular aplasia which associates to huge inflammatory cells infiltration and fibrosis around the blood vessels in CCl4- treated rat (G2), as shown in Figure 4C. A re-establishment of the conditions when rats are treated with A. campestris infusion.
DISCUSSION
Non- alcoholic fatty liver diseases (NAFLD) are among the most represented pathologies that affect about the quartile of adulthood, and associate to higher mortality [5,21]. NAFLD range from steatosis to much severe cirrhosis cases. They develop by excessive accumulation of fats in hepatic tissue that lately progress to fibrosis through inflammatory process resulting in scarring features. Subsequently a fibrosis stage could develop, and might be ranked into four different grades of severity. Untreated fibrosis leads to marked liver’s nodulation and appearance of the chronic state of cirrhosis. The etiology of NALFD is diverse and includes hepatitis viruses, ischemia, pregnancy, drug intake and intoxication [22]. Obesity, diabetes, hyperlipidemia and metabolic syndrome are associated to NALFD [21]. Non pharmacogical and complementary and alternative medicine are sought as determinant in preventing the disease development and progression. Herein, we investigated the possibility to use A campestris infusion as a nutritional supplement to counteract liver’s pathology induced by CCl4, in a murine experimental model. Our findings revealed that daily intake of A. campestris infusion at lower doses prevents the development and progression of the CCl4-induced cirrhosis. In fact, there was re-establishment of the normal histological features of the hepatic tissues which associated to hepatic enzymes return to the normal range. The lipid-peroxidation level was also diminished following the treatment of CCl4- intoxicated rats by the herb infusion.  Similar investigations brought approval of such preventive effects of Artemisia herbs. They were shown to improve free fatty acids induced steatosis, and exert anti-lipidemic and antifibrotic activities [23-32]. Previous studies revealed that the anti-hyperlipidemic activity of Artemisia extracts involved the suppression of the expression of peroxisome proliferator activated receptor γ (PPARγ) and leptin release, thus inhibits the cytoplasmic accumulation of fats [33]. Great consensus is attributed to the anti-oxidative and anti-inflammatory [34-38] effects of the plant molecules in the preventive/ healing mechanism. The chemistry of the plant extract showed the presence of diverse biologically active molecules, such as flavonoids, polyphenols and tannins. These molecules are known to chelate the reactive oxygen species or inhibit their formation through modulation of anti-oxidative stress enzymes. They also modulate the inflammatory process [39-41]. In fact, flavonoids extracted from Artemisia herbs did inhibit IL-12, and nitric oxide, interleukin- 1β and 6 and prostaglandin E2 production by immune cells [42,43]. Artemisia extracts have been also shown to ameliorate the cholestatic liver fibrosis and faces the free fatty acids induced apoptosis in hepatic cells (HepG2) [23,26]. The anti-apoptotic activity of the extract is suggested to be mediated through the inhibition of caspases 3 and 8 in intoxicated hepatocytes [44] thus favorizes the regeneration and repair of damaged tissue. Recent studies focused on nicotinamide N methyltransferase control to manage obesity and hyperlipidemia [45,46]. In such context, extracts from artemisia were found to reduce the nicotinamide adenine dinucleotide phosphate induced lipid peroxidation in liver tissues [47].

The daily intake of A campestris infusion, at low doses, might prevent NAFLD development and progression to severe cases. The herb’s molecules might prevent the reactive oxygen species (ROS) generation and pro-inflammatory factors (Pro-inf) release in hepatocytes and protect them from damages. Theses extracts could also regulate the fatty acids turn-over in biliary and inhibit their apoptotic effects in hepatocytes (Figure 5). Obviously, Artemisia plants have been used since the ‘antiquité’ to treat several diseases and might be considered as safe, except for people showing hypersensitivity against the plant, and could be envisaged as candidate therapeutic to relieve NAFLD in humans.

CONCLUSION
Our findings strongly suggest the preventive daily intake of Artemisia campestris infusion, at low doses, to prevent NAFLD development and pathogenesis progression. Thus, it could be used as nutritional supplement in order to manage and prevent hepatic diseases. Further investigations are in need to better outline the mechanistic scheme of the observed effects and to translate it for clinical usage.
CONFLICTS OF INTERESTS
None.