Research Article
Fenugreek Nutritional Supplement Might Improve Diabetes Mellitus Associated to Hypertension
Purpose: Huge plethora of scientific reports proved the efficacy of Fenugreek seeds to counteract diabetes. In this work we evaluated its therapeutic effect against both hyperglycemia and hypertension, in type 2 diabetic patients under oral treatment by metformin.

Patients and Methods: The blood pressure parameters, glycemia, insulinemia and some selected hematological and biochemical parameters were evaluated in 9 adult patients before, one hour postprandial of 100 ml of a powdered-fenugreek seeds’ suspension (20 g/L) and one hour following the subsequent prescribed drugs administration.

Results: The oral intake of 2 g of fenugreek induced significant reduction in patients’ overnight fasting glucose and blood pressure, concomitantly to a significant insulin level’s augmentation, in comparison to baseline. DBP, SBP and MBP were significantly reduced by 09.96 %, 08.28 % and 09.17%, respectively. Succeeding administration of pharmaceutic therapy resulted in further downstream of glycaemia, DBP, SBP and MBP.
Conclusion: The recent findings support the use of fenugreek as dietetic supplement to manage cases of hypertensive diabetic patients under anti-diabetes oral therapy. Further investigations are envisaged to better clarify the importance and mechanistic scheme of such poly-therapeutic virtue of this medicinal herb.
Keyword: Fenugreek seeds, Nutritional supplement, Hypertension, Diabetes Mellitus II

Diabetes is an endocrine health disorder that affects carbohydrates’ metabolism and results in a hyper-glycemic status. Obviously, it is related to a deficit in insulin secretion or function. Lifestyle, nutritional habits, aging, familial inheritance and socioeconomic attributes are commonly listed as risk factors involved in the disease’s development [1-3]. Diabetes could be complicated by other pathological disorders like blood hypertension, hyperlipidemia, nephropathy, retinopathy and cardiovascular events. In particular, hypertension (HTA) is the mostly diagnosed complication in diabetic patients and requires intensive pharmaceutical interventions to reduce the disease’s morbidities and mortalities [4-8]. Indeed, the efficacy and safety of poly-medication to manage type 2 diabetes mellitus (T2DM) which associated to hypertension (T2DM-HTA) has been discussed [8]. Some studies suggested that hypertension management did influence insulinemia and subsequently augment the risk of insulin-resistance [9,10]. Thus, non-pharmacological strategies, like moderate physical activities and controlled diabetic diets, are sought with great concern to ameliorate the therapy. Culminating scientific evidence supports the importance of naturally occurring products in wound healing the disease [11-13]. In particular, some medicinal herbs are already used as anti-diabetic. Among these natural therapeutic alternatives, Fenugreek (Trigonellafoenum- graecum L) has been used since the medieval time as nutritional and medical component and is considered as “generally recognized safe for use”. This Fabacae plant’s anti-diabetic effect has been experimentally and clinically proved [14-16]. It contains several biologically active chemical compounds such as dioscin, diosgenin and 4- hydroxyl-isoleucine that modulate carbohydrates’ metabolism through different modus operandi. Fenugreek compounds counteract the disease by (i) repressing the glucose uptake at the gut and tissues’ levels and inhibiting enzymes that generate glucose, (ii) stimulating the insulin secretion and ameliorating the insulin resistance, and (iii) preventing hepatic and pancreatic cells damages via an anti-oxidative protective pathway. Further investigations showed that Trigonellafoenum-graecum also improves hypertension, probably through various mechanistic schemes including a sedative, diuretic, central regulation and vessels blood bed remodeling and protection [14,17-20]. These evidenced biological activities pushed us to investigate this medicinal herb as a “poly-therapeutic” against T2DM-HTA.
PATIENTS AND METHOD
Patients
Adult T2-DM patients visiting a secondary hospital for follow-up were asked for participation to this clinical controlled trial. Among 23 patients, only 9 patients presented the inclusion criteria and were included in the study. The main inclusion criteria were (i) a diagnosed T2-DM associated to hypertension (SBP ≥ 140 mmHg or DBP ≥ 90 mmHg), (ii) absence of any other diseases, (iii) do not receive anti-hypertensive drugs, and (iv) habituated to consume fenugreek seeds as traditional medication against diabetes (Figure 1). 14 asked patients were excluded for diverse raisons (normotensive, under antihypertensive therapy or declined to participate). Included patients received metformin alone (1 case) or in association to sitagliptine (1 case), glimepiride (2 cases) or glipenclamide (5 cases). All included participants gave a written contentment for their participation. Their anthropometric parameters and medical information are described in Table 1.

Fenugreek seeds’ Preparation
Seeds of Trigonellafoenum-graecum (Fabacae family) were purchased from local market, and were rinsed in water, left to dry at ambient temperature and thereafter thinly powdered. The obtained powder was suspended into drinking water at a dose of 2 g/ 100 ml, immediately before its oral administration.
Study Design
This study intends to evaluate the potential of fenugreek seeds intake to counteract arterial blood hypertension in type 2 diabetes mellitus patients. Our study design was in accordance with the Declaration of Helsinki of ethical principles for medical research involving human subjects (2018) and was approved by a local ethical comity settled at our institution. After 10 min of rest, the blood pressure was recorded at setting position. Thereafter, blood samples were withdrawn in order to determine hematological and biochemical parameters. Subsequently, patients did orally take 2 g of the powdered fenugreek seeds’ suspension, followed by their conventional drugs which were administered one hour later. Clinical diagnoses were made 60 min after each treatment (fenugreek intake and drug administration) (Figure 1). The overnight blood sugar, insulin, total bilirubin (BIL), urea, creatinine, aspartate aminotransferase (ASAT), alanine aminotransferase (ALAT), alkaline phosphatase (PAL), Triglycerides (TG), total cholesterol (Chol), low density lipoproteins (LDL) and high-density lipoproteins (HDL) were evaluated.
Throughout the experimental period, patients were maintained in quiescent setting position, in order to minimize the fluctuation in their basal metabolism. At the end of the experiment, patients were followed -up for at least another hour before discharge. All of them approved their satisfaction and no relevant perturbations were noticed.
Statistical Analysis
Statistical analyses were accomplished using SPSS program (for Windows .11). T- test for paired variables was applied to compare between the three time-points of the study design. All results are expressed as mean ± standard deviation, and significance was retained at 5%.
RESULTS
Statistical analyses showed significant progressive decrease (p < 0.05) in PS, PD and PM following the successive administration of fenugreek seeds and anti-diabetic conventional drugs. For example, the systolic blood pressure diminished from 155.56 ± 15.09 mmHg at admission to 142.22 ± 14.81 mmHg after fenugreek intake, to finally reach 137.78 ± 12.02 mmHg one hour after the subsequent pharmaceutical therapy (Figure 2). T. graecumfoenum seeds contributed to a blood pressure decline of 09.96 %, 08.28 % and 09.17 % respectively in DBP, SBP and MBP, in comparison to baseline. The ensuing administration of Metformin associated to Glimepiride, Glibenclamide or Stigaliptine brought further downstream of DBP, SBP and MBP, respectively of 00.32%,02.65 % and 04.82 %. (Figure 3).
Biochemical analyses revealed a significant (p ≤ 0.001) diminishing of the overnight glucose concentration. Glycaemia progressively decreased from1.99± 0.80 g/l to 1.43 ± 0.78 g/l, respectively at admission and one hour after fenugreek intake. Finally, it reached 1.39 ± 0.68 g/lone hour subsequent to metformin administration (Figure 4). Concomitantly, the insulin level was significantly augmented following fenugreek intake (12,26 ± 02.77 UI; p=0.009) and after metformin administration (15.14 ± 07.66UI; p=0.007), in comparison to the basal status (7.42 ± 02.46 UI) (Figure 5).
Statistical analyses showed a significant diminishing of white blood count (WBC) one after fenugreek intake (05.68±0.79, .103/µl), when compared to baseline (06.13±0.82 .103/µl) and 16 min after the subsequent metformin administration (06.21±1.09 .103/µl) (p = 0.035 and 0.031, respectively).Similarly, TG level (00.86±0.38 g/l)showed a substantial decrease after fenugreek consumption in comparison to baseline (00.91±0.44 g/l), but it significantly augmented following drugs administration (00.91±0.42 g/l; p = 0.013). A noteworthy non-significant hissing of the phosphatase alkaline activity was observed following the drugs oral intake (59.86 ± 30.08 UI), in comparison to the preceding situation (at baseline (27.67 ± 18.30 UI) and one hour postprandial of fenugreek (29.14 ± 30.26 UI)). The remaining evaluated hematological and biochemical parameters did not present any relevant changes (Table 2).
DISCUSSION
T2-DM is a multi-factorial common disease that requires various strategies for its management. While effective in lowering blood glucose concentration, some conventional oral medications could aggravate the patient’s resistance to glucose [8,10]. Thus, the disease’s morbidity might be elevated, particularly when it associated to other pathological conditions such as hypertension that complicates the therapy and adds further health risks [21]. Recently, dietetic and lifestyle interventions, and alternative medicine are sought as inevitable to control diabetes, and eventually hypertension and obesity [2,21,22]. 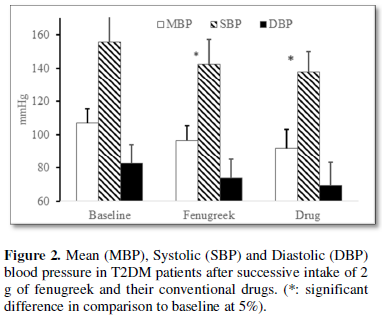 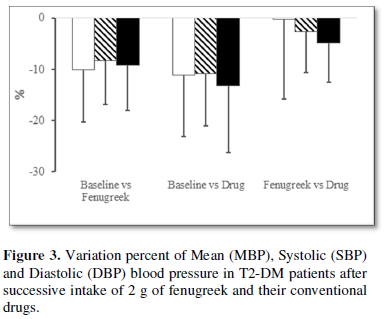 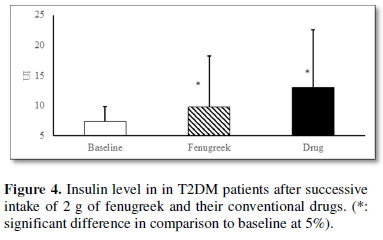 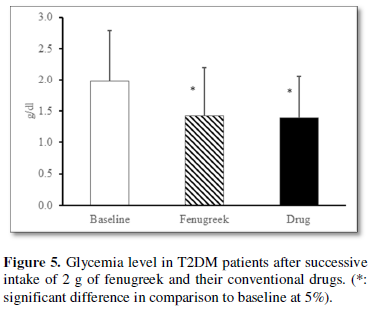 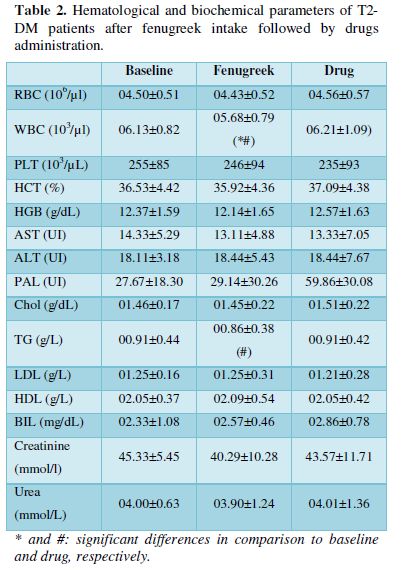 used Metformin alone or in association with Glimepiride, Glibenclamide, or Stigliptine as oral antidiabetics to manage T2-DM. The Metformin modus opeardi involves the reduction of appetite and glucose intestinal absorption. It also inhibits hepatic gluconeogenesis, and enhances the glucose uptake by peripheral tissues via stimulating their sensitivity to insulin [23]. Other therapeutics did exert either a secretagogue effect on insulin or inhibit the dipeptidylpeptidase-5 (DPP-4) enzyme. When used for long durations, these drugs are suspected to augment the risk for developing micro and macro- vascular complications and cardiovascular diseases; and to increase diabetes’ morbidity and mortality [4,24-26]. In the recent work, we found that fenugreek seeds consumption lowered both arterial blood pressure and the overnight glucose levels, in addition to the stimulation of insulin release, in T2-DM patients. Promoting blood glucose reduction and hypertension were observed when patients received fenugreek before the conventional treatment. The anti-hyperglycemic mechanism of fenugreek is thought to be bypassed through (i) the inhibition of enzymes involved in glucose genesis like α- amylase inhibition [27], and stimulation of phospho-fructokinase in intestine mucosa [28], (ii) a secretagogue effect on insulin [29], its receptors transduction signals stimulation, and amelioration of insulin- resistance [30], (iii)an hepato-pancreatic protective activity, and (iv) appetite reduction. The potential of fenugreek to reduce arterial blood pressure, as found by Talpur [30] in an experimental animal, might be attributed to its inhibition of the adrenergic-angiotensinergic contractility of the vascular bed [18,31,32]. In effect there is substantial evidence that Fenugreek inhibits the angiotensin- converting enzyme activity [33,34]. Ghule [35] found that trigonelline, a chemical constituent isolated from fenugreek could ameliorate the diabetic hypertensive nephropathy through a protective mechanism involving its anti-oxidative activity [35]. Across the literature there was a remaining debate about the importance of oral anti-diabetic pharmaceutics in the development of hypertension. Some authors found that long treatment by glibenclamide and sitagliptin results in blood pressure decrease [36]. Others mentioned an opposite effect on BP [37], but still beneficial in controlling hyperglycemia which could be reduced to above 20 % [38]. Herein, the fenugreek alone induced about 10 % reduction of the blood pressure, that sustained the anti-hypertensive effect of the conventional treatment. The extent of the therapeutic virtue of this plant encompasses the prevention against hepatic enzymes perturbations that are induced by chronic treatment with anti-diabetic drugs [39], the amelioration of metformin’s treatment of hyperglycemia [40], and participates in limiting the outside effects of sitagliptine and glibenclamide through its anti-inflammatory activity [41]. Our findings support the approach of fenugreek supplementation to manage both diabetes and hypertension [42-45].
CONCLUSION
Fenugreek has been used since long time as diet component and traditional therapy against many pathologies. It is “a generally recognized safe natural product”. In the recent paper we support its importance to treat type 2 diabetes mellitus associated to hypertension. A dietetic supplement of small quantities of fenugreek might improve both diabetes and hypertensive status, and improves the oral anti-diabetic therapy. It is thought as good alternate/supplement to manage such cases of the disease. Further researches are envisaged to understand T. foenumgraecum active components and their mechanism of action to manage both diabetes and hypertension.