Diabetes mellitus is a group of metabolic diseases in which has high blood sugar in person, either because the body does not produce enough insulin, or because cells do not respond to the insulin that is produce [1]. All over the world there are a large number of people suffer from diabetes [2], approximately (25.9%) [3].

Oxidative stress (OS) due to the imbalance between pro-oxidant/antioxidant status results in generation of reactive oxygen species (ROS) and free radicals or impairedantioxidant defense system [4], subsequent modification of biomolecules such as protein, lipids and nucleicacids.Excessive generation of ROS and free radicals have been implicated in a variety of pathological events such as ischemia-reperfusion injury, cardiovascular disease [5] hepatorenal syndrome [6], scleroderma [7], smoking [8], coronary reperfusion injury [9], atherosclerosis [10], diabetes mellitus [11,12] and neurodegenerative disease [5]. Oxidative stress appears to be an integral and possibly causative part of the pathogenesis of diabetic retinopathy. Compelling evidence has been provided that both insulin-dependent and non–insulin-dependent diabetic patients are under conditions of oxidative stress and thatthe complications of diabetes mellitus (thereafter indicated as diabetes) could be partially mediated by oxidative stress [13], and that peroxide formation is increased in elevated glucose solutions [14,15]. Oxidative damage of cellular membranes has been suggested as a common mechanism in a large number of bio pathological conditions. It can be measured by either primary or secondary end products of peroxidation [16]. While secondary end products include thiobarbituric reactive substances (TBARS), F2-like products termed F2-isoprostanes (F2-IsoPs) [17,18]. Increased levels of F2-IsoPs can be found in the plasma of patients affected with type I and type II diabetes [11,19] and in animal models of diabetes [20], and currently are used as which permits unrestricted use, distribution, and reproduction in any medium, provided the original author and source are credited.
in vivo indicators of lipid peroxidation [13,11,21,22].Zinc (Zn) is the most abundant trace intracellular element required for a number of cellular processes, including cell proliferation, reproduction, immune function and defense against free radicals [23]. It plays an important role as an antioxidant, protects cellular components from oxidation, [24]an activator for more than three hundred enzymes in the body [25], and in different metabolic pathways including glucose metabolism [26].Also, Zinc promotes hepatic glycogens through its actions on the insulin pathways, storage, and secretion [27] and thus improves glucose utilization [28]. Due to its fast electron transfer capability, ZnO is a key material for fabrication of bio membranes, and enzymatic detective devices [29]. Many studies have addressed the importance of ZnO as an antioxidant and a therapeutic agent in several free radicals initiating systems [26,30]. Nano-ZnO is a product whose particle diameter is between 1to 100 nm. More recently, the study of ZnO nanoparticles is a very active area [31,32]. Umrani and Paknikar[33] reported that the antidiabetic effects of ZnONPs through induction of insulin, also, Umrani and Paknikar [23] proved the ability of ZnONPs for controlling of blood glucose in diabetic rats. Soheir et al. [34]investigate the useful effects of high dose of F: ZnO and Cl: ZnO nanoparticles in protection diabetic rats against hyperglycemia and retina against oxidative stress. There is only one study thatmonitored the effect of Cl: ZnO nanoparticles on diabetic rats, but there is not previous study carried out with Cl: ZnO nanoparticles on the role of isoprostane during diabetic rats. Therefore, this work designed to prepare ZnO nanoparticles doped with chlorine (Cl: ZnOPNs) and reviews the role of ZnCl2andCl: ZnONPs on F2-Isoprostane as biomarkers of oxidative stress in retinal in relation to type II diabetes in rats.

The ZnO nanoparticles doped with chlorine was prepared by a chemical solution method from zinc acetate (ZnAc) and oxalic acid. The preparation is as follows: 20 mL of a 0.5 M ethanolic solution of oxalic acid was added drop-by-drop to 20 mL of a 0.1 M ethanolic solution of ZnAc under stirring and maintained at 60°C for 3 h. Then 0.5 M of aqueous solution of ammonium chloride (NH3Cl) was added to the abovesolution in order to get at5% Cl/Zn ratio. A white precipitate was obtained, which was separated by filtration and washed with a mixture of 75:25(water: Ethanol). This precipitatewas dried in an oven at a temperature of100°C for 24 h. The obtained precursor was finally calcined at500°C for 2 h, with a heating rate of 5°C/min. All the reagents used in the experiments were of analytical grade and used directly as purchased.
CHARACTERIZATION
The structure was analyzed by FTIR spectra (FTIRNicolet6700).Surface Morphology was analyzed by SEM (Quanta 3D FEG/ FEI) and TEM (JEOL, Tokyo, Japan) operating at 60 kV.

Measurements of blood glucose and insulin

The results are represented as mean ±SE and statistically analyzed by using one-way ANOVA. Accepted level of significance (P ≤ 0.05).

Figure 1shows the FT-IR at sorption spectrum prepared sample (Cl: ZnONPs). The peak at 470  is the characteristic distinct stretching vibration of zinc oxide. The broad absorption peak at 3400  can battributed to the characteristic absorption of hydroxyls group. These results agree with Soheir et al. [35]. They reported that the undoped ZnO, anabsorotion peak is observed centered at 372nm (3.33 eV), which is in good agreement with previously reported works of ZnO single crystals and Cl: ZnONPs. 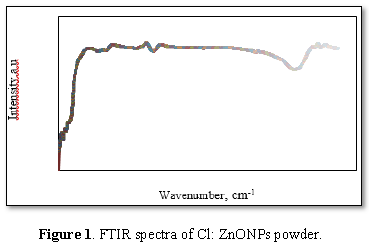 Figure 2shows the SEM images of the Cl: ZnONPs powder prepared with chlorine doping. Cl: ZnONPs shows a rode shape. The results of this study agree with Soheir et al. [35], and they reported that the ZnO nano powders prepared with fluorine and chlorine and doping have average particle size 17.7 and 59.3 nm, respectively.

Table 1shows the changes of serum glucose levels induced by ZnCl2 and Cl: ZnONPs in diabetic rats. Experimental groups treated byZnCl2 and Cl: ZnONPs (5 and 10 mg/kg bw) for 3 days, showed a significant (P≤0.05) decreased in serum glucose levels, it found to be (138.022, 116.094 mg/dl), (117.962, 102.964 mg/dl) at 5 and 10mg/kg bw), respectivelyafter72h. Additionally, Cl: ZnONPs (10mg/kg bw)+STZ (60 mg/kg bw) treated group resultswere close to normal values thatshowed inNC group. This showed a great anti-diabetic activity of zinc oxide nanoparticles, as zinc has been elucidated to be a potent metal that improves glucose utilization and metabolism through its potent influence on enhancement of hepatic glycogenesis through actions on the insulin signaling pathway [35]. Alkaladi et al. [38] showed a great reduction in blood glucose level in diabetic groups treated with ZnONPs, SNPs and insulin. However, ZnONPs induce more reduction than SNP. Rehal et al. [31] reported that at 30, 60, 90 and 120 min, the plasma glucose levels in the STZ-induced rats. That was treated with Vildagliptin, ZnONPs, and various combinations of the two, groups, for 7 weeks showed significant improvements compared to the diabetic group (group II). The maximum improvement in the reduced plasma glucose levels was observed in the rats treated with the combination therapy (Vildagliptin plus 10 mg/kg/d ZnONPs, group IIIh) compared to diabetic group and the other treated groups [39]. Also, a great reduction in blood glucose level in diabetic groups treated with low and high dose of F: ZnONPs and Cl: ZnONPs, it found to be 119.03, 117.10, 108.97 and 103.97 mg/dl after 72 h, respectively [35].

Our results revealed thatZnCl2 and Cl: ZnONPs(5 and 10 mg/kg bw) +STZ (60 mg/kg bw)were significantly (P≤0.05) increased serum insulin level (290.40,328.40 uIV/ml),(310.40,369.80 uIU/ml) at (5 and 10mg/kg bw), respectively, compared to (PC)(177.40 uIU/ml) (Table 2).The serum insulin levels were significantly decreased in the diabetic group compared to the control group[39]. This result may be due tozinc could enhance the glucose stimulated insulin secretion from rat isolated pancreatic islets [40].Umrani and Paknikar [34]demonstrated that ZnONPs did not possess the risk of hypoglycemia in living organisms so it can act as an insulin secretor/due to accumulation of zinc in the secretory vesicle of B cells using transporter 8 [41]. Zinc transporters are also identified in adipose tissues and liver [35,42]. Treatment with ZnONPs. Induced a significant increase in the serum insulin levels compared to the diabetic group (NC)[39]. The groups administration high dose of F: ZnONPs and Cl: ZnONPs gave best results (326.40 and 367.80 pg/ml), respectively, compared to PC (175.40 pg/ml). ZnONPs and SNP could increase serum insulin level in diabetic groups, it was found (79.4% and 3%), respectively if compared with diabetic groups treated with insulin (97.3%). It appeared that ZnONPs also induced more insulin secretion if compared to the effect of SNPs [31]. ZON treatment showed a trend towards a dose-dependent increase in nonfasted serum insulin levels (35% increase at 10 mg/kg dose). However, no significant effects were seen on fasted serum insulin levels after ZON treatment, indicating no risk of hypoglycemia[34].The best results were observed in diabetic rats treated with ZnONPs in a dose of 10mg/kg b.w [43].

Isoprostanes in contrast to lipid hydroperoxides are chemically stable end products of lipid peroxidation, and the measurement of their levels in plasma or urine may permit a sensitive and specific method for detection of lipid oxidative damage in vivo [22]. In the present study the retinal F2-IsoPs levels were significantly (P≤0.05) increased in the diabetic group (0.7162 pg/ml bw) compared to the NC (0.2762pg/ml bw) after 72h (Table 3). Treatment withZnCl2 and Cl: ZnONPs (5 and 10 mg/kg bw) +STZ (60 mg/kg bw) induced a significanty decreased of F2-IsoPs the retina levels

compared to (PC). The results of Cl: ZnONPs (10 mg/kg bw) +STZ (60 mg/kg bw) was close to normal value that showed in NC group (Table 3).Increase in plasma level of total F2-IsoPs in type 2 diabetic nephropatic patients (P ≤0.01) with respect to controls [44]. Increased F2-IsoPs synthesis during diabetes appears to be responsible in part for the increase in renal TGF-β, α well-known mediator of diabetic nephropathy[6]. Plasma F2-IsoPs levels in STZ-induced diabetic rats were significantly higher than in nondiabetic animals [45].

Based on our results, we can conclude that ZnCl2 and Cl: ZnONPs lead to activation of insulin mechanism of action and induction its synthesis. Cl: ZnONPs + STZ increased SOD and decreased F2-IsoPs activates significantly (P ≤ 0.05). Furthermore, the results elucidated the beneficialeffects of