Case Report
Alopecia Areata During the Treatment with Beta-Interferon for Multiple Sclerosis
Alopecia areata (AA) is an autoimmune disease that produces a non-scarring hair loss. The association between AA and systemic autoimmunity is well known, however, only isolated cases of coexistence of AA and multiple sclerosis (MS) have been reported so far. Both entities share diverse etiopathogenic mechanisms, among which stand out the genetic predisposition, some triggers and the alterations in Th1 and Th17 pathways. In this work, the authors describe one case of MS treated with beta-interferon for two months before, with subsequent development of AA. Therefore, herein, the relationship between AA and MS, as well as the possible role of beta-interferon in the onset of the cutaneous condition are discussed.

Alopecia areata (AA) is a hair-specific chronic autoimmune disease. In AA, the perifollicular inflammation leads to a premature transition from anagen to catagen and telogen phases that produces a non-scarring hair loss [1].

A 34-year-old man with a 2-year history of multiple sclerosis (MS), presented with two alopecic patches on the beard area (Figure 1). The patient was being treated with beta-interferon 1b (IFN-β1b) for two months before the skin condition was set. Trichoscopy showed black dots, yellow dots, exclamation mark hairs and broken hairs (Figure 2). Blood and serological tests were unremarkable. Screening for thyroid disease, lupus erythematosus, pernicious anemia, autoimmune hepatitis, diabetes mellitus and Addison’s disease were negative. The diagnosis of AA was established and therapy with a low-potency topical corticosteroid was set. During the following month, some white vellus hair grew at the periphery of the affected areas. Subsequently, the patient received treatment with 10% intralesional triamcinolone acetonide on three occasions, presenting partial hair regrowth. IFN-β1b was not withdrawn to avoid a negative effect in the course of MS. After eight months of follow-up, the lesions have persisted unchanged so far. 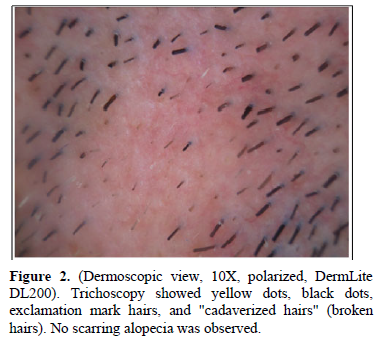 The association of AA with systemic autoimmunity is well known, however, the association between AA and MS has not been described in the literature until recently [2]. Regarding this, only isolated case reports of coexistence of AA and MS do exist [1,2].

Alopecia areata and MS share various etiopathogenic features. Genetic predisposition is an important factor in both entities, with the genes encoding the main histocompatibility complex (MHC) type II being most likely involved [1]. Moreover, both entities are autoimmune diseases that imply a loss in the immune privilege (IP) of specific anatomical areas (the hair follicle [HF] in AA, and the central nervous system [CNS] in MS). Immune privilege can be carried out due to diverse anatomical and functional items among which are a variety of anti-inflammatory cytokines and Treg cells that down-regulate the expression of MHC types I and II [1].

Several triggers for IP loss in AA and MS have been proposed. On one side, the Th1 cytokine γ-interferon (IFN-γ) is able to induce a pro-inflammatory response by increasing the expression of MHC type I and, consequently, the antigenic presentation. On the other side, the imbalance between Th17 and Treg cells in favor of the former, seems to have an important role in the inflammatory response of both entities [1]. Therefore, alterations predominantly in Th1 and Th17 pathways are responsible for the clinical features in both diseases [3,4].

β-interferon is a widely used therapy in MS, due to its great variety of anti-inflammatory effects in this disease [4]. Recently, it has been proposed that IFN-β acts as an immunomodulator in disturbances that mainly affect Th1 immunity, through a blockade of the inflammatory properties of IFN-γ and an interaction in macrophage activity. On the contrary, it is believed that IFN-β could act as a response amplifier in diseases predominantly conditioned by alterations in Th17 immunity, such as psoriasis [4].

The fact that IFN-β is an effective treatment for MS, being this a disease mediated, at least partially, by Th17 pathway, raises doubts about the previously noted. In fact, between 30% and 50% of MS patients are non-responders to IFN-β4. Regarding this, some studies have observed significantly higher serum levels of Th17 axis-related cytokines, such as IL-17, in the non- responders’ cohorts [4]. This may suggest that MS patients with a higher Th17 etiologic component could suffer a proinflammatory response to IFN-β. Therefore, patients with AA with a high Th17 component could behave in a similar way, presenting proinflammatory responses to IFN-β.

Thereby, in our particular case, the history of MS, the administration of IFN-β, or particularly the coexistence of both, may constitute the cause of AA. Probably, according to the WHO-UMC causality assessment, this case of AA could be considered as a “possible” adverse effect of IFN-β [5]. Thus, we describe a new case of AA in a patient with MS. The etiopathogenic mechanisms previously exposed, suggest that the association between AA and MS is undervalued. Therefore, further research is required to determine the real frequency of this association, as well as to study the possible role of IFN-β as a trigger for AA.