Research Article
Tobacco Products in the Life of Pulmonary Patients
Introduction: smoking is the inhalation of smoke resulting from the burning of leaves of the nicotinic species. Europe-wide tobacco history dates to the 15th century, which in the 20th century has caused every 10 deaths in the world. According to the World Health Organization (WHO), around 25% of the adult population smokes in the world. In 2000, it caused 69,000 deaths in Poland, of which 43,000 were premature deaths. The most common diseases caused by smoking are cardiovascular disease, cancer, and pulmonary disease.

Material and Methods: The survey covered 100 people staying at the Malopolska Hospital of Lung Diseases and Rehabilitation. E. Wojtyła in Jaroszowiec. The survey consisted of four parts and mainly concerned the role of tobacco products in patients' lives.

Goal: Assessment of nicotine addiction and the role of tobacco in respondents.

Results: After analyzing the responses received from patients, they were divided into four groups: 1- people who still smoke (16 people), 2- people who have smoked in the past (49 people), 3- People who are passive smokers (20 people) 4- people who have never had contact with tobacco smoke (15 people).

Discussion: In 2007, every fourth person in Poland admitted to smoking, despite various warning actions about the effects of addiction, which kills 700 thousand people in Europe. Smoking cigarettes is not only a health but also an economic problem, because huge costs are incurred for the treatment of tobacco-related diseases. However, fighting addiction is not easy, because the body becomes addicted to nicotine absorption both behaviorally and pharmacologically. And although every 10 sec they kill one person, they still enjoy enormous "popularity" among both women and men.

Results: As many as 85% of respondents are people who have had or still have contact with tobacco smoke. Addiction affects a similar number of women and men. Only the difference in education between smokers was observed.

Keywords: Tobacco, Addiction, Firestorm questionnaire
INTRODUCTION
Smoking according to the International Statistical Classification of Diseases and Health Problems ICD-10 is classified with the F17 code - mental and behavioral disorders caused by smoking T65 - the effect of toxic other and undefined substances -T65.2- tobacco and nicotine [1]. Smoking cigarettes consists in inhaling the smoke, which is generated because of burning leaves of the nicotiana species, having about 60 varieties [2]. It causes the body's addiction to the desire to absorb the right dose of nicotine, causes both pharmacological and behavioral addiction [3]. The European history of tobacco dates back to the 15th century, when Christopher Columbus received tobacco from the Indians during his trip to America, which 500 years later caused every 10 deaths in the world [4,5]. Currently, according to the World Health Organization (WHO), it is estimated that around 25% of the adult population (over 15 years of age) in the world smokes. In Poland alone in 2000, tobacco was the cause of 69 thousand. deaths, including 43 thousand are premature deaths, i.e., deaths of people aged 35-69 [6]. Deaths occur because of diseases caused by the chemicals in a cigarette. The most common diseases include cardiovascular diseases, cancer (mainly of the lung, larynx, mouth) and pulmonary diseases - most often chronic obstructive pulmonary disease (COPD) [7]. It is estimated that approximately 80-90% of lung cancer patients are smokers, and the probability of developing the disease increases with the number of cigarettes smoked and the duration of smoking [8]. Likewise, 80% of smokers will develop COPD, which in the last year ranks third among the causes of death in the world [9].

MATERIAL AND METHODS
The study involved 100 randomly selected patients staying at the pulmonology ward at the Małopolska Hospital of Lung Diseases and Rehabilitation them. Edmund Wojtyła in Jaroszowiec, in the period from February to July 2019. There were 57 women and 43 men among the respondents. The average age was 67 years. The patients were asked to complete a questionnaire (Appendix 1), which consisted of four parts (the first three parts by the author and the fourth part is the smoking addiction test according to Fogerstrm). The obtained results were analyzed statistically.
Appendix 1: Questionnaire.
Part I:
Part II: This part was answered by persons who answered in the negative in question 11.
If YES, how long have you been smoking?
How many years have you smoked?
What was the reason for quitting?
Part III: This part was answered by persons who answered in the affirmative in question 11. 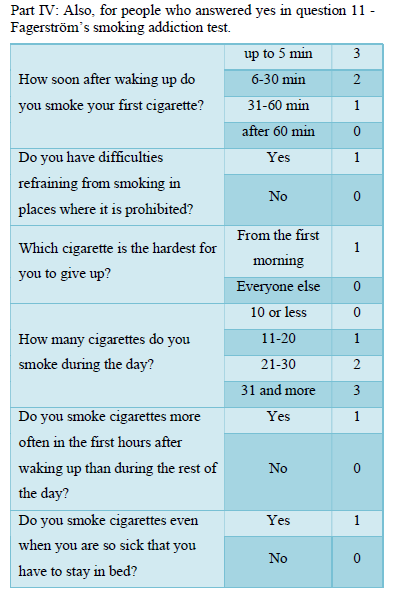 Among the people who admitted smoking, they were in the pulmonology department due to chronic obstructive pulmonary disease (9 people), asthma (6 people), and one with emphysema. The vast majority of these people have been smoking for over 40 years - 12 people and four people have a shorter ‘adventure’ with smoking. These people smoked an average of 14.6 cigarettes a day. Only 18.75% of the group of ‘smokers’ made an attempt to quit smoking in the past, and now 81.25% of respondents declare their willingness to quit smoking. The main reason for quitting smoking is that to improve health (85%), for financial reasons (18.75%), 75% of respondents think that cigarettes are expensive, and one person (6.25%) is the reason to stop smoking, that they scarify life. However, 87.5% of people say that they enjoy smoking cigarettes, 75% of people think that cigarettes have a calming effect on them, and 75% of respondents in this group also like cigarettes. Patients from this group were also asked to complete the fourth part of the Fagerström addiction questionnaire [10].
The obtained results are presented in Figure 2. 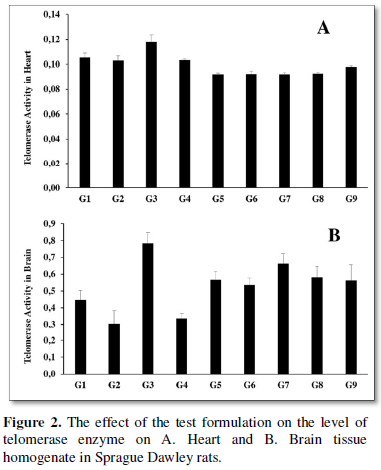 Analyzing the above chart, 31% of respondents obtained 7 or more points, which means a strong dependence. It is not only a behavioral but also a pharmacological addiction [3], often considered by addicts that they are unable to live without nicotine. On the other hand, 69% of people obtained a result below 7 points, which may mean that these people do not have pharmacological addiction.
The second and most numerous groups, numbering 49 people, are people who admit to smoking in the past, and who stay in the pulmonary department mainly because of COPD - 53%, Asthma - 31%, and lung cancer - 10%, emphysema 4% and inflammation bronchitis 2%. Table 1 shows the smoking time and the time elapsed since quitting the addiction.
The most numerous groups are people who have not smoked for 11 to 20 years - 15 people, while when it comes to smoking time, the most numerous groups were smoking time from 21 to 30 years -17 people.
Table 2 below shows the most common reasons why they quit the addiction.
While analyzing the above table, despite the fact that the answer “for no reason” appeared in the second place, the vast majority of respondents quit the addiction only when the disease appeared, which is definitely too late.
The third group consisted of people who have never smoked but live with smokers in their households and are therefore exposed to passive smoking. The group consisted of 20 people, including 17 women and 3 men. Due to bronchial asthma - 12 people, COPD - 7 people and one for pulmonary fibrosis - were in the pulmonary department. The fourth and last group consisted of 15 people, 12 women and three men, these people had never smoked cigarettes and the family from their shared household also did not smoke. They stayed in the ward due to asthma 13 people, 1 person with a history of lung cancer and one for bronchiectasis. 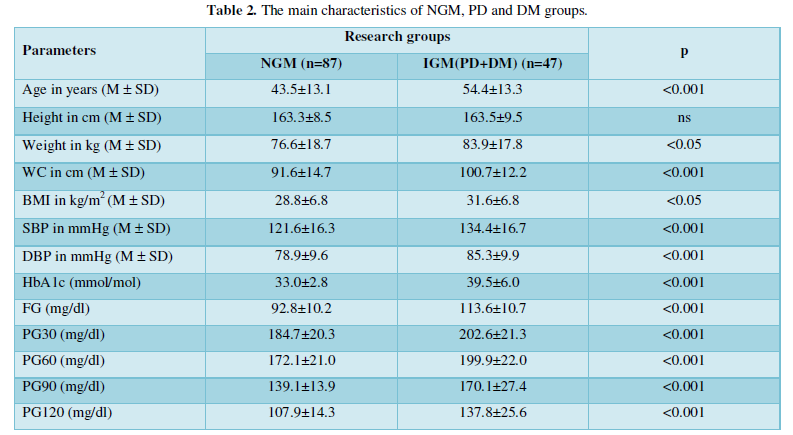 DISCUSSION
According to the 2007 report on the nationwide survey on attitudes towards smoking, every fourth person admitted to smoking cigarettes on a daily basis [11]. And despite many warnings, such as the Act of 22 July 2016 “On protection of health against the consequences of the use of tobacco and tobacco products”, Article 2, point 14 requires manufacturers of tobacco products to place warnings on the packaging in the form of photos and text about the effects of smoking [12] still kill nearly 700,000 people in Europe each year [13]. However, the tobacco addiction is not only a health problem, but also an economic one. According to the study by Motrzyk [14] the average cost of treating tobacco-related diseases amounts to PLN thousand. PLN 1,895,932.5, of which the largest percentage is transferred to COPD. It is also estimated that the number of patients with advanced COPD is 400,000 and is, next to lung cancer (also a tobacco-related disease), the most common palliative treatment [15].
However, attempts to quit the addiction are not easy, if only because of a strong addiction, which is characterized by a great need to take nicotine, often a lack of control of one's behavior, and even preferring smoking a cigarette to other activities [3]. This difficulty is evidenced by the result among my respondents, where 81.25% of smokers made an unsuccessful attempt to quit. Also, data from the work of. Szpringer [16] which states that 80% of smokers admit that they tried to quit the addiction at least once in their life. This is despite the fact that the pharmaceutical market is rich in substances facilitating the fight against addiction, such as nicotine gums, patches or medications - Bupriopion - an antidepressant drug. However, it is also important to motivate the addicted person to fight, but also to talk to the doctor [17]. Cigarettes, which were introduced on a production scale in 1840, were initially smoked only by men [18]. Today the number of smoking men and women equalizes. Among my respondents, the difference was 6.2%, so there was definitely a slight majority of men. In the respondents who were still smoking, I noticed differences in education. The largest number of addicted people are people with secondary education 50%, followed by those with vocational education 25%, higher education 18.75% and primary education 6.25%. These results are not confirmed by the study by Puto [19] who in their work did not observe any significant relationships between tobacco addiction and education.
Summarizing all the above information, I believe that the tobacco addiction, which causes death every 10 sec around the world should become a priority issue for the government and the whole of humanity to fight it [20].
CONCLUSIONS
Download PDF View PDF