Review Article
Recent Advances in Phytoleads for Management of Respiratory Disorders
Respiratory disorder is one of the common disorders that is related with Respiratory Track. Respiratory disorders continue to be a major health challenge worldwide especially due to the increasingly fast development of resistance to the drugs currently in use. Many Phytoleads or Phytoconstituents are traditionally used for respiratory illness treatment, and some have been investigated for their efficacy with positive results. In this review, all the phytoleads or phytoconstituents having anti-inflammatory activity and some of them possess antioxidant activity too. All are used to treat respiratory tract inflammation. Curcumin used as antiasthamatic also. The results of this study show that phytoleads or phytoconstituents are used for the treatment of respiratory system disorders. The information gained on frequently used phytoleads might give some leads for future targets for further analysis in order to develop new drugs.

Keywords: Respiratory diseases, Phytoleads, Isolated compound, NDDS for Phytoleads, Covid-19
INTRODUCTION
Lung diseases are one of the leading causes of death globally. It is characterized by airﬂow limitation, loss of elasticity, chronic inﬂammation, emphysema, bronchoconstriction and mucus hyper secretion. Several factors including genetics, tobacco smoke, air pollution, inhalation of noxious particles, occupational chemicals and dusts have shown to contribute to the development of lung disease. Some of the most widespread are asthma, chronic obstructive pulmonary disease (COPD), occupational lung diseases and pulmonary hypertension. Some disorders are moderate to lethal and life threatening like tuberculosis and pneumonia [1].
ANGIOGENESIS RELATED DISORDERS IN LUNGS
Angiogenesis is the growth of new capillary blood vessels in the body. It is an important natural process for healing of wound and redevelopment of new tissue. The body has ability to control angiogenesis by producing a precise balance between growth and inhibitory factors during neovascularization. When imbalance is occurred, it leads to the development of less or a greater number of blood vessels [2,3].
Various disorders have excessive angiogenesis as an underlying mechanism. Abnormal blood vessel growth, either excessive or insuﬃcient is responsible for the development of deadly conditions like cancer, skin diseases, diabetes, cardiovascular diseases, stroke, age-related blindness and lung disorders [4].
Low immune functioning, adverse climatic conditions, intolerable air pollution, excessive exposure to smoke and other toxic materials and presence of fungal, viral, bacterial infections are some common causes of lung disorders. Lungs are characterized by double vascularization, ﬁrst is bronchial vasculature, associated with thoracic aorta and second is the pulmonary system which is part of the air/blood barrier of the lung tissue [5].
Lung tissue produces VEGF and FGF-2 which is an important growth factor necessary for building of lung tissue architecture. Exposure of lung tissue to intolerable air pollutants, excessive smoke and other toxic gases triggers overexpression of VEGF and FGF-2 in lung tissue architecture by activation of inﬂammatory flood which is an important reason for the development of abnormal angiogenesis in lung and later causes development of lung cancer [6].
COPD is associated with signiﬁcantly reduced capillary length density and hypoxia condition followed by activation of HIF-1α which plays an important role in the development of angiogenesis [7].
Whereas, asthma is associated with airway congestion and re-modulation because of the development of inﬂammation and deposition of mucus plug in respiratory tract which is linked with excessive angiogenesis [8]. Cytokines, cell adhesion molecules, growth factors, vasoactive peptides, proteolytic enzymes (metalloproteinases) and plasminogen activators play a vital role in the development of above-mentioned condition which activates EGFR/PI3K/AKT/mTOR pathways. Activation of these pathways is responsible for the activation of endothelial growth regulator followed by overexpression of VEGF and FGF-2 [3]. Lung disorders like asthma, COPD, Idiopathic pulmonary ﬁbrosis and pulmonary hypertension develop edema, inﬂammation, ﬁbrosis, airway obstruction, decrease ventilation and damage to alveolar capillaries. These conditions are responsible for the inadequate supply of oxygen to the lung tissue. If an insuﬃcient supply of oxygen continues for a long time, supplementary mechanisms attempt to restore oxygenation or help the body adapt to hypoxia. Hypoxia is mediated by hypoxia-inducible factors (HIFs) having 2 subunits HIF-1α/2α and 1β [9]. Decreased oxygen supply after a period stabilizes HIF-1α through post-translational modiﬁcation. Once it stabilizes, α subunit is cleaved oﬀ and binds to the β subunit this hetero dimer then binds to numerous promoters containing hypoxia response elements (HREs), leading to the transcription target genes of VEGF. Hypoxia-inducible factor (HIF-1) activates epidermal growth factor (EGF) which causes over expression of VEGF in lung tissue. Nitric oxide synthesis is regulated by the enzyme NO synthase specially eNOS/NOS3 isoform. This isoform plays a key role in VEGF-induced angiogenesis which is obtained by phosphorylation of eNOS isoform at serine 1117 residue by AKT or by hypoxia [10]. Uncontrolled inﬂammation is the main factor behind the pathogenesis of various lung disorders. Inﬂammation leads to alterations in the bronchial epithelium and lung micro environment [11].
Various pro inﬂammatory markers like transforming growth factor-beta (TGF-β), platelet-derived growth factor (PDGF), interleukin 6 (IL-6), interleukin 8(IL-8) which activates signal transduction and activator of transcription 3(STAT3) pathway. Subsequent STAT3 phosphorylation is involved in upregulation of angiogenic mediators, such as VEGF, FGF-2 and HIF1 which leads to angiogenesis [12].
Beside this Cyclooxygenase (COX)-2, an inducible enzyme that catalyzes the formation of prostaglandins (PGs) from arachidonic acid in lung tissue, is also activated by hypoxia and it helps in the stimulation of VEGF gene expression [13].
Oxidative stress in asthma and COPD is associated with airway inﬂammation by activating inﬂammatory gene expression. The nuclear factor-kappaβ (NF-κβ) is an important factor that regulates cytokine activity in the airway during inﬂammation [14] (Figure 1). 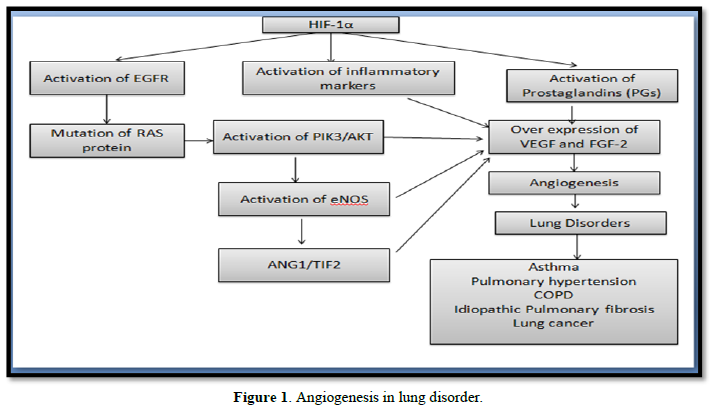 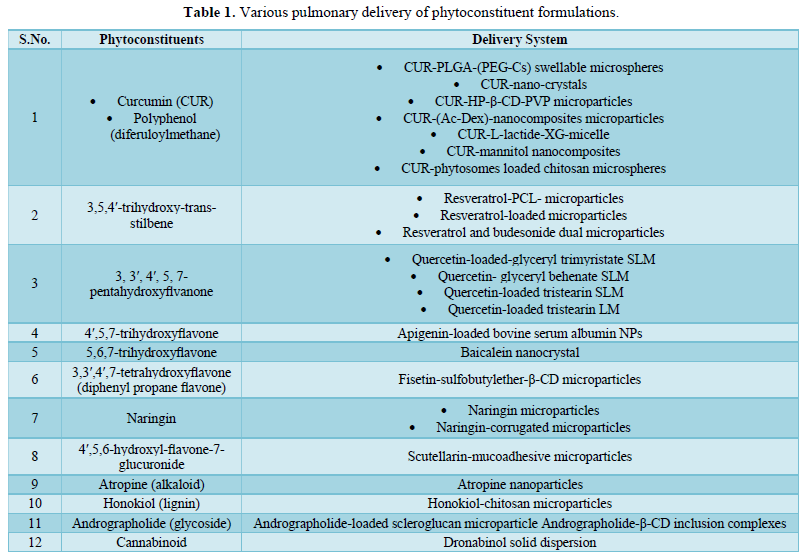 All the above phytoconstituents having anti-inflammatory activity and some of them possess antioxidant activity too. All are used to treat respiratory tract inflammation. Curcumin used as antiasthamatic (Table 2).

Till now many phytoconstituents were discovered for anti-asthmatic activity and several plants having these constituents to treat asthma related problems. These plants are: Curcuma longa, Aerva lanata, Cynodon dactylon, Piper betle, Lepidium sativum, Curculigo orchioides, Casuarina equisetifolia.
Medicinal plants with demonstrated activity against pneumonia:
Medicinal plants with demonstrated anti-tuberculosis activity:
NDDS for Phytoleads: Phytoleads are to be incorporated in the suitable delivery agents for better and site-specific action or local action. Novel drug delivery system enhances bioavailability of particular molecule and act locally hence reduce adverse kind of effect. In allopathy system it is the most trending system of drug delivery. It is also used in phytopharmaceuticals for delivery. Phytosomes, liposomes, neosomes, ethosomes, nano particles, nano gel, and many more are used. “Phytosome Complexed with Chitosan for Gingerol delivery in the Treatment of Respiratory Infection” was already done Singh RP [40].