Research Article
Seeds of Hyocyamus niger Linn (Ajwain Khurasani): Pharmacognostical and Pharmacological Appraisal including Unani Medicine Perspective
Hyoscyamus Niger (also known as Henbane) from Solanaceae family is used medicinally for its dried leaves and flowering tops, having not less than 0.05% alkaloids, calculated as hyoscyamine. Besides, there are other significant alkaloids are also found in other parts of the plant too, like seeds, roots, fruits contain a significant amount of atropine, scopolamine and hyoscine. The plant has a magnificent medicinal value since ages, used as local anesthetic to relieve pain and insomnia. Historical records mentioned its association with black magic, too due to its anesthetic property in the Middle Ages.

Seeds of the plant are used in Unani medicine in the name of Ajwain Khurasani for its wide therapeutic value. Present paper discusses the detailed description of the pharmacognostical and pharmacological importance of the plant in addition to its details as mentioned in Unani literature. Seeds, used in Unani medicine are less explored, till now. So, the paper presents a description of the pharmacological value of its seeds, scientific studies done so far on its seeds, and provides a frame work for the researcher to explore more from it.

Therapeutic description of the plant Hyoscyamus is first found during the period of Dioscorides in the first century A.D., who is said to use it to procure sleep and relieve the pain. Later, it was a frequently mentioned drug in Anglo Saxon works on medicine of the eleventh century, in which it was named as ‘Henbell’. Later, due to its illusion like property its use was stopped and for some time it was removed from the London Pharmacopoeia of 1746 and 1788, but then after its significant efficacy of the extract found for epilepsy and other nervous and convulsive diseases through a series of studies by Baron Storch, it was restored in 1809.

Hyoscyamus Niger is a biennial 80 cm long herb that thrives well in the temperate climate and is propagated diversely in rocky, arid areas and along roads. It is distributed throughout western Himalaya of Kashmir to Garhwal, Agra, Western and Northern Asia, Europe, Siberia, Egypt, Khurasan, Iran and North Africa. It occurs throughout the year; flowering occurs during February to March and seeds get mature during April to May. The plant is an erect course, viscid herbs; seeds are called as ‘the seeds of banj’. The plant has oval leaves, and yellow to dull green colored flowers with purple veins; its fruit have numerous seeds.  It is considered as magic brewer, anodyne; prevent convulsions, neurologic pain, psychosomatic disorder, tremor, and insomnia, anti-tumor. It is also used as abstinent therapy for opium addiction.

Henbane: The name Henbane is derived from Anglo-Saxon comprising of two words i.e., ‘Hen’ and ‘Bane’ means hen killer; when fowls eat their seeds, they got paralyzed and die. Therefore, it is named as Henbane.
Hyocyamous: It is Greek’s root of Hyocyamus; hyos means “pig” and cymo means “bean”. That means Hog's-bean the name of animal which is supposed to eat it with impunity [4].

Stem: They are branched, slightly hairy.

DESCRIPTION ACCORDING TO UNANI MEDICINE TEXTS

Hyocyamus niger are the seeds of herb named as banj, commonly found in Siberia, Egypt, Khurasan, and Iran. In India, it is cultivated in Agra, Kashmir, and Garhwal.

Nomenclature as ‘Ajwain Khurasani’ in Unani Medicine: The fresh herb smells as of Trachyspermum ammi (Ajwain), so it was named as Ajwain; and as its origin was found to be from Khorāsān (the northeast province of Greater Iran) it was named as Khurasani.

Temperament: Their active constituents are cold and dry (Yabis arzi) which cause whiteness in cold body and blackness in dry body. Therefore, Zakariya Razi has mentioned it as dawae muzmina (medicine for chronic diseases) in his book. The variety of Ajwain Khurasani having cold and moist temperament in higher degree is considered as worst. Its best variety is white one which has lesser cold and moist temperament [6-8]. There is variation in the degree of coldness and dryness according to different thought Unani scholars, as follows:
Cold dry 3(3) or cold dry 4(1)7, 9
Cold dry 3(1), 7
Cold 3, Dry 35
Cold dry 3 8

Leaves: It can be differentiated from Nepeta hindostana (Badranjboya) by leaves, which are wider, long, thick, and glabrous than N. hindostana. Further the leaves of H. niger are, light blackish green with dentate margin; ovate in shape with acute apex, glaborous with alternate phyllotaxy. They have strong taste and smell. They are collected carefully at the time when flower become three times of its size and get dried.

Stem: It is thick and glabrous.

Flowers: Blue/ white colored, pentamerous, having 2 capsules in which seeds are enclosed.

Fruit: It has berry like pomegranate but it is not round. They are arranged longitudinally with seeds inside.

Seeds: They look like mustard (ra’ai), but they are smaller than it and thin [9]. Seeds have a shelf life of less than a year (Figure 1).
Extract is considered better than its gum. 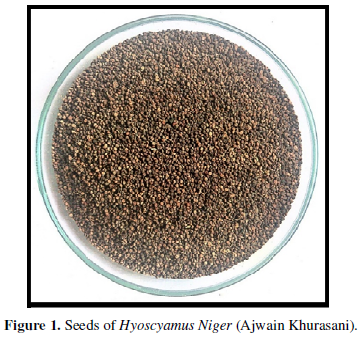 Procedure & time of collection of seed

The seeds are collected from ripe fruits. To collect them, the plant is uprooted before the fruit dehiscence and spreaded in sunlight for 2-3 days and racked with sticks so that fruits can open. A single plant can yield 10,000 seeds. The dry seeds are garbled, sieved and stored in cool and dry place, free from moisture.

Method of processing: As they constitute as a toxic drug, so they are detoxified by soaking into vinegar for three consecutive nights. The ratio of drug and vinegar is 1:4. After that they are dried and kept for further use [5].

It is bronchodilator, anti-secretory, and urinary bladder relaxant, spasmolytic, and hypnotic, hallucinogenic, pupil dilating, sedative and bears anti-diarrheal properties like other anti-cholinergic drugs.

Antispasmodic activity: The crude extract of H. niger seeds caused a complete concentration dependent relaxation of spontaneous contractions of rabbit jejunum, similar to that caused by verapamil, whereas atropine produced partial inhibition. The test drug also inhibited the contractions induced by carbachol (1μm) and K+ (80 mm) in a pattern similar to that of dicyclomine, but different from verapamil and atropine. It indicates the Ca2+ channel blocking mechanism in addition to an anticholinergic effect of the test drug. Antispasmodic effect of H. niger is mediated through a combination of anticholinergic and Ca2+ antagonist mechanisms. The relaxant effects occur at much lower concentrations in the trachea and bladder in guinea‐pig trachea and rabbit urinary bladder tissues, carbachol (1 μm) and K+ (80 mm) induced contractions at around 10- and 25-times lower concentrations than in gut, respectively. Also have antidiarrheal and antisecretory effects against castor oil‐induced diarrhea and intestinal fluid accumulation in mice [13].

Hypotensive, Cardio suppressant and vasodilator activities: The hypotensive activity of H. niger crude extract showed fall in the arterial blood pressure (BP) of rats under anesthesia in a dose-dependent manner. H. niger crude extract exhibited a cardio depressant effect on the rate and force of spontaneous atrial contractions in guinea-pig atria. In isolated rabbit aorta, H. niger crude extract (0.01-1.0 mg/ml) relaxed the phenylephrine and K (+) (80 mM)-induced contractions and suppressed PE (1 microM) control peaks obtained in Ca (++)-free medium similar to that caused by verapamil. The vasodilator effect was endothelium-independent as it was not opposed by N (omega)-nitro-L-arginine methyl ester in endothelium-intact rat aortic preparations and also occurred at a similar concentration in endothelium-denuded tissues. These data indicate that H. niger lowers BP through a Ca (++)-antagonist mechanism [14].

Analgesic, anti-inflammatory and antipyretic activity: The methanolic extract of seeds produced significant increase in hot plate reaction time, while decreasing writhing response in a dose-dependent manner indicating its analgesic activity. It was also effective in both acute and chronic inflammation evaluated through carrageenin-induced paw edema and cotton pellet granuloma methods. In addition to its analgesic and anti-inflammatory activity, it also exhibited antipyretic activity in yeast-induced pyrexia model [15].

Antiparkinson activity: The neuroprotective potential, of aqueous methanol extracts of H. niger seeds was evaluated in 1-methyl-4-phenyl-1, 2, 3, 6-tetrahydropyridine (MPTP) model of Parkinson disease in mice. The extract caused significant inhibition of monoamine oxidase activity and attenuated 1-methyl-4-phenyl pyridinium (MPP+)- induced hydroxyl radical (OH) generation in isolated mitochondria, Accordingly, the protective effect of the methanolic extract of H. niger seeds against Parkinsonism in mice could be attributed to its inhibitory effects on the increased ·OH generated in the mitochondria [17].