Review Article
Photo Pharmacology: A Door to Future Therapeutics
For a drug to be effective, it should act precisely at its site of action. This indeed is a tiring work for drugs if they work alone. It takes help from light. This is a fascinating concept is what photo pharmacology is all about. Field of phototherapy was born with research work of Niels Finsen in the treatment of lupus vulgaris. Photodynamic therapy emerged at the same time with the works on combined effects of light and dyes. These branches of Photo medicine are in clinical use with few limitations. With the strong foundation of existing pharmacology and a new light technique came the field of so-called photo pharmacology. It aims at introducing photo switches into the drugs whose action can be switched on and off reversibly on irradiation. This review aims to give an overview on photo pharmacology and also its applications, current trends and future scope.

Keywords: Photo pharmacology, Phototherapy, Phototherapy in diseases.
INTRODUCTION
Pharmacology deals with using drugs to treat disease. But for a drug to be effective target site selectivity is important. Most of the time, drugs are expressed not only at its target site but also in other sites leading to many adverse effects. Apart from this poor selectivity issues, Resistance is also emerging as another problem. These issues of poor drug selectivity, increased adverse effects and emerging resistance have literally compelled the researchers to explore new options which can add a completely new dimension to existing pharmacotherapy [1].
LIGHT IS THE NEW IDEA
From the era of bible, Curative ability of sunlight had been used to treat skin diseases. People of Egypt ingested “ammi majus “leaves for treatment of skin depigmentation. Later in 1850, Aaron Lerner was attracted to isolating the active component in these leaves which proved to be a photosensitizer when activated by sunlight. This was later followed by studies on safety and efficacy of these compounds in the treatment of vitiligo. All these pre historic trial and error experiments with light in medicine proved that light can potentially activate a substance by bringing out its therapeutic potential which led to the origin of a new field called Photo pharmacology (Figure 1) [2]. 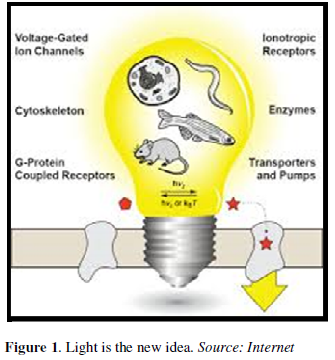 JOURNEY OF LIGHT IN MEDICINE
To understand this journey of light from Phototherapy to present era of photo pharmacology the following concepts play a role:
Both phototherapy and photodynamic therapy have issues in terms of poor drug selectivity and challenges in delivery of light. It has been seen that photo pharmacology is really successful in shining more light to the region of interest as in target selectivity.
Because main principle in photo pharmacology is not just targeting light to the site or altering at genetic level, it aims to alter the structure of the drug by introducing photo switchable moiety thereby achieving drug control. Main advantage when compared to other branches of photo medicine lies in its precision over target selectivity [2,3].
PROBLEMS IN CURRENT PHARMACOTHERAPY
Poor drug selectivity depends on the affinity of the drug for its targets. Cytotoxic agents like taxanes cause many adverse effects because these drugs act by impairing mitosis and this not only affects cancer cells but also healthy cells which causes all systemic side effects. To overcome this, targeted therapy should be achieved. Poor selectivity will lower the threshold level of toxicity thereby narrowing therapeutic window which leads to reducing the allowable dose. This results in not using the entire potential of the drug and probably we can conclude that many potential drug candidates which can improve current pharmacotherapy or even treat the untreatable are just discarded to the bin due to its poor selectivity.
Another major problem faced is resistance. This is of major concern in the field of antibiotics. The concept behind this idea of resistance and poor selectivity is that drug not only is selective for bacteria responsible for an infection in patient but also acts on the bacteria that are outside.
Effectiveness of a drug depends on both Pharmacokinetic and pharmacodynamics parameters. Pharmacokinetics deals with how a drug is travelling around the body which is governed by ADME and can be evaluated based on the polarity, lipophilic nature and size of pharmacologically active compound. Dynamically these properties can be controlled by incorporation of a photo switch and photo irradiation. e.g., Polarity of the drug determines its distribution. Pharmacodynamics of a drug will define its drug-target interaction. Common drug targets are Ion channels, GPCR, Enzymes.
Main aim while designing any drug will be to achieve maximum affinity towards target. When photo switchable moiety is introduced into the drug, its configuration changes i.e.; drug switches between states of high and low affinity. So, at sites where drug action is not needed and to reduce adverse effects, drug can be possibly switched OFF and when action is required - switched ON [4].
CONCEPT OF PHOTO PHARMACOLOGY
Photo pharmacology uses light to modulate activity of drug as required. By inserting photo responsive switches to the parent drug changes its configuration when it is exposed to light of specific wavelength. These photo switches can bind by covalent or non-covalent interaction. Activation of these photo switches can happen either externally or internally. Photo switch is basically activated at a specific site with high spatiotemporal precision by using the specific wavelength hence rest of the sites in the body do not get exposed to harmful effects associated with the drug. This photo activation can be usually reversed spontaneously or by application of light of different wavelength [4].
PHOTO SWITCHES [5-7]
Definition: Compounds which absorbs photon and undergoes reversible change in both structure and property. Structure wise, they can belong to any type but should be compatible with presence of light and oxygen at cellular level.
Finding the Right Photo switch
Azobenzene molecule is usually favored as a photo switch over others.
Advantages: Once in a state of excitation, they undergo rapid photo isomerization on picosecond level. This prevents formation of toxic singlet oxygen which can kill the nearby cells. Azobenzenes are small molecules so they can be easily incorporated into LMW drug like molecule.
Disadvantages: Long term toxicity is a problem. When photo pharmacology is just applied like a research tool, this will not be a problem but when it reaches to the clinical trial level, this poses a serious concern.
WHY AZOBENZENES ARE TOXIC? (Figure 2)

Attaching Photo switch to Pharmacophore
This strategy is based on the fact that drug has high affinity for its target in one of the photoisomerization states.
STEPS
Bistable Photo switch
This is possible if at a particular wavelength, one isomer absorbs with a high molecular absorptivity where the other isomer is completely transparent.
CRITERIA [8] 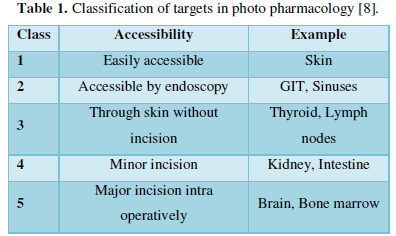 APPLICATIONS
One of the most difficult sites to irradiate with external light source will be the brain because we need invasive procedures to access it. But brain is usually the hub for many new drug developments since many disorders with complex pathologies and that are difficult to treat originate here. Photo pharmacology can help in studying different molecular targets in CNS but here we will try to focus on Alzheimer’s disease.
So far Clinical trials of 105 drugs are in progress in all three phases for Alzheimer’s disease where main target is to improve cognitive impairment and various other clinical parameters. But the overall rate of success in establishing a new drug is very low which can be attributed to complexity of disease process and understanding of enzymes and receptors involved. Poor target selectivity of these compounds also accounts for the low success rate.
Photo switchable inhibitor of Alzheimer’s disease:
Hydrolysis of Ach is catalyzed by AchE. Reduction in Ach levels are found to be the reason for cognitive impairment in Alzheimer’s disease so AchE inhibitors are the current treatment options now (Table 2).

Due to emerging resistance, need for localized delivery is increasing. Photo pharmacology serves this purpose by providing precise spatiotemporal control. In the field of antimicrobial photo pharmacology, mostly UV light is used for triggering the release of antibiotic which comes with its own risk of photo toxicity. Recently, Boron-dipyromethene sensitive at 470 nm was used as a photo switch and levofloxacin as a model drug. Here, visible light was used to cleave this drug complex (Table 3).

JB253 [12]
Why Sulfonylurea is a target for photo pharmacology? 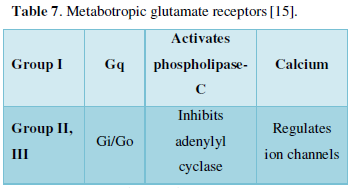 There is a compelling need for development of spontaneous photo switches since toxicity with existing azobenzenes also poses a major problem. Success of these light-based techniques will depend on a lot of factors like understanding more on existing photo switches involved and how they interact at the cellular and environmental level [1,4,20].

Delivering photons to target poses a challenge in that they can get scattered at the tissue level and can be absorbed which may limit the penetration of light. With advances in optical techniques more precise control over spatiotemporal activity of drug can be achieved thereby improving safety and efficacy of these agents compared to their counterparts thereby paving way for clinical studies using photo pharmacological agents [6].

Photo pharmacology tries to create a difference in conventional pharmacotherapy to a greater extent by utilizing the mini- miracle photo switches more specifically azobenzenes and with the studies done so far, we can conclude that it is successful in dealing with problems like poor selectivity by employing techniques that have a high spatiotemporal precision. So far all is well when it is only happening in the research labs targeting receptors and enzymes but its real usefulness can be commented upon only when it targets the real population by clinical trials.
Download PDF View PDF