Research Article
Consciousness Energy Healing Treatment and its Significant Effects on the Isotopic Abundance Ratio of Cefazolin Sodium
Cefazolin sodium is a broad-spectrum beta-lactam antibiotic and first-generation cephalosporin with bactericidal activity. In this study, the impact of the Biofield Energy Healing/Blessing on cefazolin sodium for the assessment of isotopic abundance ratio by LC-MS and GC-MS spectroscopy. For this study, the test sample cefazolin sodium was divided into two parts, control and treated sample. The control test sample did not receive any Blessing, but the treated test item was received the Biofield Treatment/Blessing remotely by Mr. Mahendra Kumar Trivedi, a renowned Spiritual Biofield Energy Healer, The LC-MS spectra of both the test items at the retention time (Rt) 4.7 min exposed the mass of the protonated molecular ion peak at m/z 455 [M+H]+. The Biofield Treated cefazolin sodium was significantly increased (67.66%) the isotopic abundance ratio of PM+1/PM (13C/12C or 2H/1H or 17O/16O or 15N/14N or 33S/32S) by LC-MS than untreated cefazolin. Therefore, 13C, 2H, 15N, 17O, and 33S contributions from (C14H15N8O4S3)+ to m/z 456 were increased significantly in the Biofield Treated/Blessed cefazolin than untreated sample. The GC-MS peak intensities of the treated test item at m/z 56 and 132 were significantly raised by 130.15% and 188.4%, respectively compared to the control sample. The increased isotopic abundance ratio in the Biofield treated/Blessed cefazolin sodium may increase the intra-atomic bond strength and its physical stability. The new form of cefazolin sodium would be better to design more efficacious pharmaceutical formulations against urinary tract infections, respiratory tract infections, cellulitis, endocarditis, pneumonia, joint infection, biliary tract infections, blood infections, genital infections, and also prevent group B streptococcal disease at the time of delivery and before surgery, etc.
Keywords: Cefazolin sodium, The Trivedi Effect®, GC-MS, LC-MS, Isotopic abundance ratio
INTRODUCTION

Cefazolin sodium is a broad-spectrum beta-lactam antibiotic and first-generation cephalosporin with bactericidal activity. Cefazolin sodium is useful for the treatment of a number of bacterial infections caused by Staphylococcus epidermidis, Streptococcus pyogenes, Staphylococcus aureus, Escherichia coli, Proteus mirabilis, etc. [1-3]. The infections associated with the bacteria treated by the cefazolin sodium are urinary tract infections, pneumonia, blood infections, endocarditis, cellulitis, respiratory tract infections, genital infections, biliary tract infections, joint infection, and also prevent group B streptococcal (GBS) diseases during and/or before surgery, etc. [1-3]. Side effects with the cefazolin sodium use are hypoprothrombinemia, stomach pain, diarrhea, vomiting, rash, blood dyscrasias, allergic skin reaction, etc. [2-4]. Cefazolin needs to use with safety during pregnancy and breastfeeding as a minor amount of cefazolin enters the breast milk [2,5]. Cefazolin sodium administered in various dosage forms available in the form of injectable, eye drop, powder for injection, etc. [6]. It is a white or near-white crystalline powder, freely soluble in water, slightly soluble in methanol and ethanol, and practically insoluble in dichloromethane, acetone, isopropanol, chloroform, and ethyl acetate [7].

As the physicochemical properties of a pharmaceutical compound play a crucial role in its dissolution, absorption, and bioavailability, many research activities are carrying out throughout the world by the researchers to improve its quality in formulations [8]. The Trivedi Effect® (a form of Biofield Energy Healing Treatment) is scientifically proven phenomena have the significant impact on particle size, surface area, thermal properties, and isotopic abundance ratios of nutraceutical and pharmaceutical compounds [9-11]. The Trivedi Effect involves an individual expert can harness an inherent intelligent energy from the Universe and transfer this energy to any living and non-living objects thought transmission process on the planet via the probable form of neutrinos [12]. “Biofield Energy” is the electromagnetic energy field which generated inside the body by the constant movement of the electrically charged particles (cells, ions, etc.), which can transmit the electromagnetic energy in the form of bio-photons [13-15]. Biofield based Energy Therapies have been reported with significant positive outcomes against various disease [16]. The National Centre of Complementary and Integrative Health (NCCIH) has recognized and approved Energy Therapies as a Complementary and Alternative Medicine (CAM) health care approach in addition to other practices, therapies or medicines such as Ayurveda, homeopathy, yoga, Qi Gong, Tai Chi, Reiki, hypnotherapy, etc. [17,18]. These CAM therapies have been accepted by 4 out of 10 adults in the U.S.A. (according to the 2007 survey) with several advantages [18]. Similar way, the Trivedi Effect®-Biofield Energy Healing/Blessing Treatment had the outstanding capability for the transformation of the living and non-living objects in the fields of materials science [19,20], agricultural science [21,22], microbiology [23,24], pharmaceuticals and nutraceuticals [9,25], cancer research [26,27], etc. The Trivedi Effect® could be a practical approach for the alteration of the physicochemical properties of pharmaceutical compounds in order to achieve the desired therapeutic effects in the body.

Analysis of stable isotopes possess wide-spectrum uses in various scientific fields for perception the “isotope effects” resulting from the alteration of “isotopic composition” of a molecule [28,29]. Such analysis can be performed by using the conventional gas chromatography-mass spectrometry (GC-MS) and liquid chromatography-mass spectrometry (LC-MS) in low micromolar concentration with sufficient precision [28,30]. Therefore, LC-MS and GC-MS analytical techniques were used in this study to characterize the structural properties and evaluate the isotopic abundance ratio analysis of PM+1/PM (2H/1H or 13C/12C or 17O/16O or 15N/14N or 33S/32S) in the Consciousness Energy Healing Treated/Blessed cefazolin sodium as compared to the control sample.

MATERIALS AND METHODS
The chemicals and reagents are purchased from different vendors in India and outside India. Example, cefazolin sodium was purchased from Tokyo Chemical Industry Co., Ltd., Japan; whereas the other chemicals were purchased in India.
The cefazolin sodium test powder sample was divided into two parts and named as control and the treated sample. The control cefazolin sodium did not expose the Biofield Energy Treatment/Blessing. But the control sample was received an ordinary treatment from a person who is ignorant about the Biofield Energy Treatment/Blessing called a “sham” healer. However, the treated cefazolin sample received the Trivedi Effect®-Consciousness Energy Healing Treatment remotely by eminent Spiritual Biofield Energy Healer, Mr. Mahendra Kumar Trivedi, USA, under laboratory conditions for 3 min. After completion of the Blessing, both the samples were kept in sealed conditions and characterized using sophisticated analytical techniques.
The LC-MS analysis of the cefazolin samples was carried out with the help of LC-MS/MS ThermoFisher Scientific (USA), assembled with an iron trap detector and connected with a triple-stage quadrupole mass spectrometer. The details in-house protocol was followed as per previously published research work [31]. The natural abundance of each isotope (C, H, O, and N) was predicted from the mass peak [29,32-34].
The GC-MS of the cefazolin was performed with the help of Perkin Elmer Gas chromatograph equipped with a PE-5MS (30M x 250 micros x 0.250 microns) capillary column and coupled to a single quadrupole mass detector was operated with electron impact (EI) ionization in positive mode. The details in-house protocol was followed as per previously published research work [31].

RESULTS AND DISCUSSION
The cefazolin sodium samples showed the single chromatographic peak at the retention time (Rt) of 4.7 min (Figure 1) in both the chromatograms. This indicated that the polarity of the treated cefazolin was close to the control sample. In positive ion mode, cefazolin shows the molecular mass peak [M+H] + at m/z 455 in the mass spectrum [35]. The mass spectra of cefazolin at the retention time 4.7 min exposed the protonated molecular ion peak at m/z 455 [M+H] + (calculated for C14H15N8O4S3+, 455.05) in case of both the samples, along with the fragment ion peaks near m/z 323, 102, and 82.92 which were corresponded to the molecular formula C11H11N6O4S+, C4H8NS+, and C3H3N2O+ or C2H3N4+, respectively in both the samples (Figures 2 & 3). 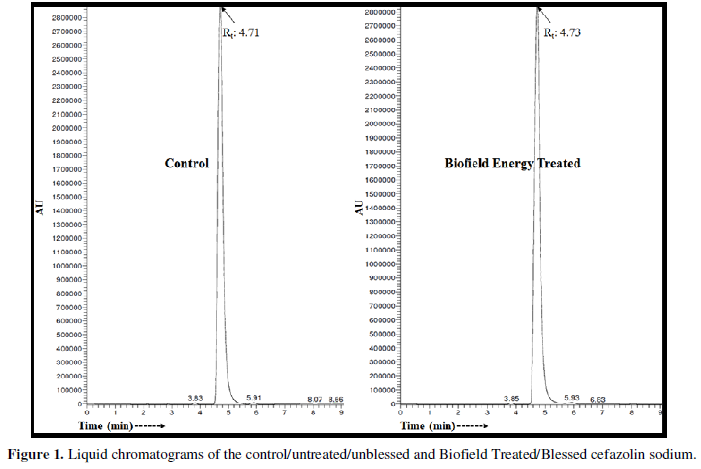 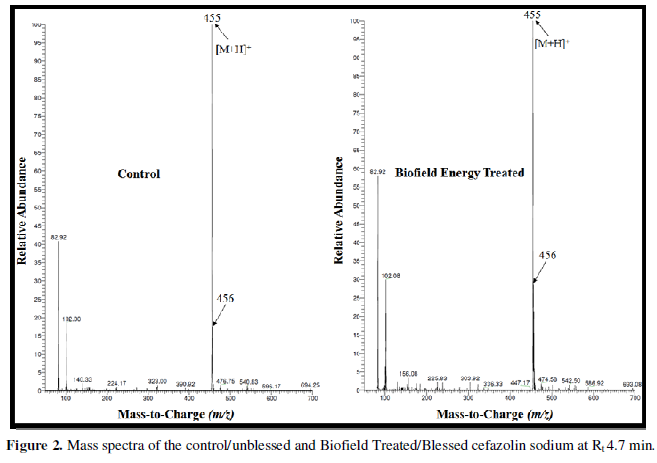 Both the samples of cefazolin showed a sharp and intense chromatographic peak at the retention times of 14.24 min (Figures 4 & 5). The mass spectra did not show the parent molecular ion peak of cefazolin, but the fragment ion peaks at m/z 132 and 56 were observed in both the case (Figures 4 & 5). The mass peak intensities of the Biofield Energy Blessed cefazolin at m/z 56 and 132 were significantly increased by 130.15% and 188.4%, respectively than untreated cefazolin (Table 2). 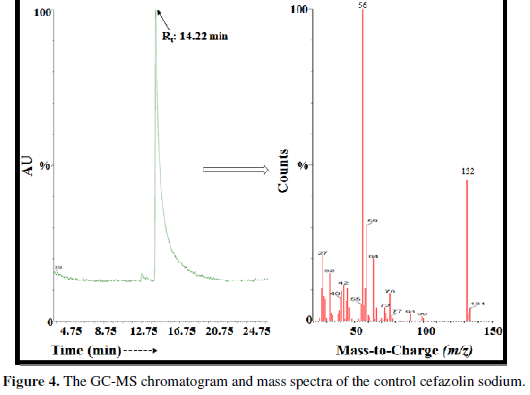 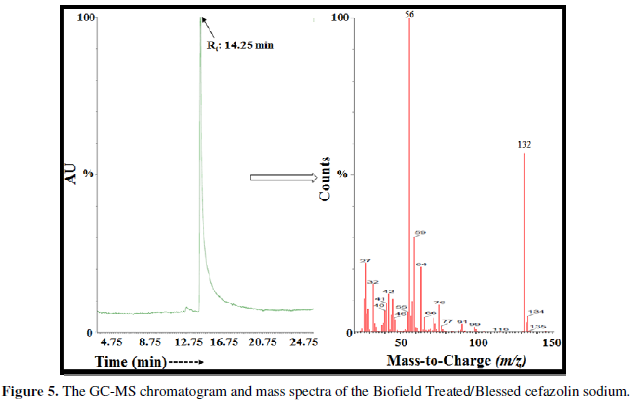 The Biofield Energy Treated/Blessed cefazolin was significantly increased the isotopic abundance ratio of PM+1/PM (2H/1H or 13C/12C or 15N/14N or 17O/16O or 33S/32S) than untreated test item. The increase in the isotopic abundance ratio in cefazolin might be attributed to the changes in nuclei, possibly through the interference of neutrino via the Trivedi Effect®-Consciousness Energy Healing Treatment [12]. Neutrino is the most abundant particle in the universe, which is a subatomic particle with no charge and small mass. These neutrinos have the ability to interact with protons and neutrons in the nucleus and isotopes formation [12,32,33]. The increased isotopic abundance ratios would influence the atomic bond vibration of treated cefazolin. The increased isotopic abundance ratio of the treated cefazolin may increase the intra-atomic bond strength, increase its physical stability [36]. Based on our previously published research article indicated that the Trivedi Effect®-Blessing form a new type of cefazolin sodium, which would offer better solubility, stability, and bioavailability compared to the control sample [37]. The new form of Biofield Energy Treated cefazolin sodium would be better to design more efficacious pharmaceutical formulations against urinary tract infections, respiratory tract infections, cellulitis, endocarditis, pneumonia, joint infection, biliary tract infections, blood infections, genital infections, and also prevent group B streptococcal disease at the time of delivery and before surgery, etc.

CONCLUSIONS
Based on the study outcomes Biofield Energy Healing Treatment significantly affected the mass peak intensities and isotopic abundance ratios of cefazolin sodium. The LC-MS spectra of cefazolin at Rt 4.7 min exposed the mass of the protonated molecular ion peak at m/z 455 [M+H]+. The LC-MS-based isotopic abundance ratio of PM+1/PM (2H/1H or 13C/12C or 15N/14N or 17O/16O or 33S/32S) in the Biofield Treated/Blessed cefazolin was significantly increased by 67.66% than untreated cefazolin. Thus, Biofield Treated or Blessed sample were significantly raised the 13C, 2H, 15N, 17O, and 33S contributions from (C14H15N8O4S3)+ to m/z 456 with respect to untreated cefazolin. The GC-MS peak intensities of the Biofield Treated sample at m/z 56 and 132 were significantly increased by 130.15% and 188.4%, respectively than untreated cefazolin. The increased isotopic abundance ratio of the Trivedi Effect®-Blessed cefazolin may increase the intra-atomic bond strength and simultaneously improved its physical stability. The new form of Biofield Energy Treated cefazolin sodium would be better to design more efficacious pharmaceutical formulations against urinary tract infections, respiratory tract infections, cellulitis, endocarditis, pneumonia, joint infection, biliary tract infections, blood infections, genital infections, and also prevent group B streptococcal disease at the time of delivery and before surgery, etc.

ACKNOWLEDGEMENT
The authors are grateful to Sophisticated Instrumentation Centre for Applied Research & Testing (SICART) India, Trivedi Science, Trivedi Global, Inc., and Trivedi Master Wellness for their assistance and support during this work.