Review Article
Phytosomes: A Promising Approach for the Delivery of Bioactive Compounds
Phytomedicines and other complex chemical compounds obtained and prepared from plants have been used extensively for the maintenance of health since ages. But the main limitation in using phytomedicines is their effectiveness because they are poorly absorbed when taken orally. The term “phyto” means plant while “some” means cell-like. Phytosomes are little cell like structure which is an advanced form of herbal formulations containing the bioactive phyto-constituents of herb extract surrounding a lipid boundary. Mainly bioactive constituents of phytomedicines are water-soluble compounds like flavonoids, glycosides; terpenoids in which flavonoids are used in a major proportion for their various therapeutic activities. As the phytosomes contain water soluble herbal extract and lipophilic outer layer they elicit better absorption which in turn produces better bioavailability and actions than the conventional herbal dosage forms. Phytosomes are produced by a process where the standardized plant extract or its constituents are bound to phospholipids, mainly phosphatidylcholine producing a lipid compatible molecular complex. This review enlists various aspects of phytosome formulation such as the advantages, methods of preparation, characterization, evaluation and biomedical applications of phytosome formulations.

Vesicular drug delivery system (VDDS) includes liposomes, niosomes, aquasomes and phytosomes are reported to be an ideal approach which satisfies all the requirements for being an effective drug carrier. VDDS are micelles containing an aqueous core and a lipid bilayer outer shell. The inner aqueous core entraps the hydrophilic drugs, while lipid bilayer encloses the various lipophilic moieties. This dual capability makes the VDDS an effective vehicle for delivery of both categories of drugs [1].

Phytosomes amidst the VDDS are distinctive as they contain the bioactive compounds as their core formulation accompanied with phospholipid. They are generally micelles formulated by colligation of aromatic active phytoconstituents such as flavonoids, terpenoids, and tannins to phospholipids in a nonpolar solvent. The lipid bilayer of the phytosomes assists ‘contact-facilitated drug delivery (CFDD)’ whereby there occurs lipid-lipid interaction between the carrier and the cell membrane followed by diffusion of bioactive compounds into the cell. Indena’s phytosome products and numerous studies conducted on them prove that they are significantly better absorbed and have considerably higher clinical efficacy. The PHYTOSOMETM tech­nology is a breakthrough model for:
This review deals with the various aspects of phytosome formulation such as the advantages, methods of preparation, characterization, evaluation and biomedical applications of phytosome formulations.

Phosphatidylcholine used in the formulation of phytosomesalso possess several therapeutic properties contributing to synergistic effect when specific substance is given.

Drug entrapment is not an issue inphytosomes as the complex is biodegradable [4].

Difference between phytosome and liposome

The basic difference between liposomes and phytosomes is that in liposomes the active constituent is dissolved in the medium enclosed in the cavity or in the layers of the membrane, whereas in phytosome, it is a part of the membrane, the molecules anchored through chemical bonds to the polar head of the phospholipid (Figure 1). 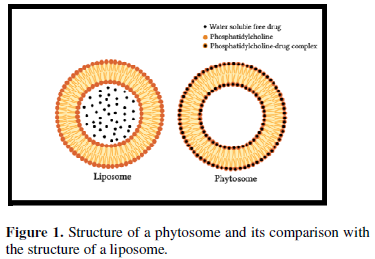 Phytosomes have the following advantages [6]:
PROPERTIES OF PHYTOSOMES

Phytosome is a complex between a natural product and phospholipids obtained by a reaction of stoichiometric amounts of phospholipids and the substrate in an appropriate solvent. On the basis of spectroscopic data, it has been observed that the main phospholipid-substrate interaction is due to the formation of hydrogen bonds between the polar head of phospholipids (i.e., phosphate and ammonium groups) and the polar functionalities of the substrate. On treatment with water, phytosomes acquires a micellar shape forming liposomal structure which can be concluded by comparison of the NMR of the complex with that of the pure precursors. The signals of the fatty chain are almost unchanged. Such evidences referred that the two long aliphatic chains are wrapped around the active content, producing a lipophilic envelope, which shields the polar head of the phospholipid and active constituents [7].

Phytosomes are improved forms of herbal formulations that are better absorbed, utilized and produce better results than conventional herbal extracts. The increased bioavailability of the phytosome over the non-complexed herbal derivatives has been demonstrated by pharmacokinetic studies or by pharmacodynamic tests in experimental animals and in human subjects [8].

METHODS OF PREPARATION FOR PHYTOSOMES

The specific amount of plant extract and phospholipid were taken into a 100 ml round bottom flask and refluxed with 20 ml of dichloromethane at a temperature not exceeding 60°C for 2 h. The mixture was then concentrated to 5-10 ml. Hexane (20 ml) was added carefully with continuous stirring to obtain the precipitate which was filtered and collected and stored in desiccators overnight. The dried precipitate was crushed in mortar and sieved through #100 mesh. Powdered complex was placed in amber colored glass bottle and stored at room temperature [9].

The specific amount of plant material and phospholipid were dissolved in 30 ml of tetrahydrofuran in a rotary round bottom flask followed by stirring for 3 hours at a temperature not exceeding 40°C. Thin film of the sample was obtained to which n-hexane was added and continuously stirred using a magnetic stirrer. The precipitate obtained was collected, placed in amber colored glass bottle and stored at room temperature.

The specific amount of plant material and phospholipids were taken into a 100ml round bottom flask and refluxed with 20ml of acetone at a temperature 50-60°C for 2h. The mixture was concentrated to 5-10 ml to obtain the precipitate which was filtered and collected. The dried precipitate phytosome complex was placed in amber colored glass bottle and stored at room temperature.

The following are the characterization techniques used for Phytosomes [11]:
Spectroscopic Evaluation

The spectroscopic evaluations are conducted to confirm the formation of complex between phytoconstituents and the phospholipids moiety and also to study the corresponding interaction between the two [4].
In-Vitro and In-Vivo Evaluations

Models of in-vitro and in-vivo evaluations are selected on the basis of the expected therapeutic activity of the biologically active phytoconstituents present in the phytosomes [12].

Most of the Phytosomal studies are concentrated on Silybummarianum (milk thistles) which carriesexclusive liver protectant flavonoids. Yanyu [13] formulated silymarin phytosome and evaluated its pharmacokinetic activity in rats. In the experiment, the bioavailability of silybin in rat was increased significantly after oral administration of silybin-phospholipid complex due to magnificent improvement of the lipophilic properties of silybin-phospholipid complex and improvement of biological effect of silybin. Tedesco et al (2004) reported Silymarin phytosome exhibit better anti-hepatotoxic activity than silymarin alone and can provide protection against the toxic effects of aflatoxin B1 on performance of broiler chicks [13].

Studies have revealed that gingko phytosomes (prepared from standardized extract of Ginkgo bilobaleaves) exhibited better results compared to the conventional standardized extract from plant (GBE, 24% ginkgo flavones glycoside and 6% terpenes lactones). In a bioavailability study conducted with healthy human volunteers the level of GBE constituents (flavonoids and terpenes) from the Phytosomal form peaked after 3 hours and sustained longer for at least 5 hours after oral administration. It was observed that the Phytosomal GBE produced a 2-4 times higher plasma concentration of terpenes than the non-Phytosomal GBE. Its major indication is cerebral insufficiency and peripheral vascular disorders and it can also ameliorate reduced cerebral circulations. Its improved oral bioavailability and high tolerability makes it the ideal gingko formulation even for long term treatment. Studies have also showed the improved efficacy of ginkgo phytosomes over the conventional standardized extract in protecting rat isolated hearts against ischemia [14].

Maiti [14] formulated the phytosomes of curcumin (flavonoid from Curcuma longa, turmeric) and naringenin (flavonoid from grape fruit, Vitisvinifera) in two different studies. The antioxidant activity of the complex was markedly greater than pure curcumin in all dose level tested. In the second study, the formulated phytosome of naringenin exhibited better antioxidant activity than the free compound with a sustained duration of action, which may be due to decrease in the rapid elimination of the molecule from body [14].

Phytosomes of grape seed extract is made of oligomeric polyphenols (grape proanthocyanidins or Procyanidin from grape seed extract, Vitisvinifera) of different molecular sizes complexed with phospholipids. The main properties of Procyanidin flavonoids of grape seed include high total antioxidant capacity and stimulation of immune response of plasma, protection from ischemia/reperfusion induced damage in the heart, protective effects against atherosclerosis hence displaying enhanced protection for the cardiovascular system and other organs through a network of mechanism that extend beyond their antioxidant effect [15].

A commercially available phytosome- Oleaselect phytosome is present in the market based on olive oil polyphenols [16]. It is a strong antioxidant, anti-inflammatory and anti-hyper-lipidemic. It inhibits the oxidation of LDL cholesterol and is cardioprotective.

Green tea leaves (Theasinensis) are famous for the presence of a polyphenolic compound epigallocatechin 3-O-gallate as the key compound. These compounds are potent modulators of various biochemical processes linked to the breakdown of homeostasis in serious chronic-degenerative diseases such as cancer and atherosclerosis. Green tea exhibits various beneficial activities such as antioxidant, anticarcinogenic, antimutagenic, hypocholesterolemic, and cardioprotective effects [17].

Maiti [14] formulated the quercetin-phospholipid Phytosomal complex by a simple and reproducible method and also claimed that the formulation exhibited better therapeutic efficacy than the molecule in rat liver injury induced by carbon tetrachloride [17].

Some Patented Technologies Related to Phytosomes

Following are the innovative processes and formulation research studies in the field of phytosomes carried out by a number of academic scientists as well as by industrial laboratories. Some patents for phytosomes and other related technologies along with their applications and innovations are listed in Table 1 [8]. 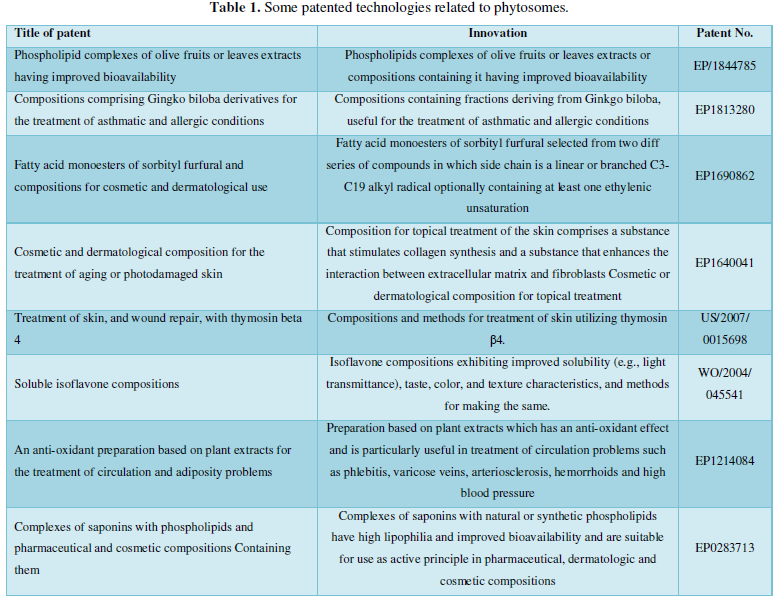 Aside from the modern developments in industrial-scale production of vesicular systems, comprising extruding methods, which offers hopeful prospective for the commercial production of these vesicular systems, the high cost of raw materials viz., PEGylated soy phosphatidylcholine may endanger this advancement. In spite of the endangering limitations ushering the formulation of phytosomes, this concept and technology bears a promising potential in its applications. In the forthcoming future, phytosomal delivery systems will stand to advance and grow for clinical therapy. It is obvious that the engineering of herbal and synthetic agents into phytosomal complexes can remarkably enhance oral bioavailability. Although there are some limitations in the manufacturing process, phytosomes have sufficient advantages to qualify for industrial production (at the pharmaceutical and food industrials) for eliciting therapeutic effects along with developing medicinal-functional foods (Table 2) [18].

The absorption of phytosomes in gastro intestinal tract is substantially higher resulting in the increased plasma level of the phytoconstituent than the conventional formulation. Complex formation ratio of component and phospholipids is 1:1 and 2:1. Phytosomes are widely used as a medicament and have wide scope in cosmeticology. A wide area of phytosome technology is yet to be revealed in future in the prospect of various pharmaceutical applications. Phytosomes forms an appreciable bridge between the conventional delivery systems and novel delivery systems.
ACKNOWLEDGEMENT

The authors wholeheartedly acknowledge the laboratory facilities and guidance provided by. The Director of Regional Institute of Paramedical and Nursing Sciences, Aizawl, India for carrying out this work and giving such a great opportunity to explore the recent technology and development in the field of Pharmaceutical Sciences.
Download PDF View PDF