Transdermal delivery has potential advantages over other routes of administration. It could reduce first-pass metabolism associated with oral delivery and is less painful than injections. However, the outermost layer of the skin, the stratum corneum limits passive diffusion to small lipophilic molecules. Therefore, effective methods are needed to safely permeabilize the skin so that ionic and larger molecules may be delivered trans dermally [1,2].

Microbial infections of the skin and underlying tissues are among the most frequent conditions encountered in acute ambulatory care [3,4]. Staphylococcus aureus is the causative agent for the majority of primary skin infections [1,5,6]. Skin infections (such as cellulitis, erysipelas and trauma- and wound-related infections), especially when associated with co-morbid conditions and/or bacteraemia, may lead to severe complications and hospital admission. In some cases they can be a cause of extensive morbidity and mortality. Owing to poor permeation of most antibiotic agents into the deep skin layers and subdermal tissues from conventional topical preparations like ointments etc, deep skin infections generally do not respond to external therapy with antibiotics [1,3,4].

These conditions are therefore usually treated by oral or parenteral antibiotics with high doses of amino glycosides, macrolides, b-lactams or other antibacterial agents [2-4].

During the course of systemic antibiotic treatment there is a significant incidence of side-effects, allergic reactions and patient inconvenience, all of which may highly influence the treatment efficiency. Ethosomes can circumvent this problem by delivering sufficient quantity of antibiotic into deeper layers of skin [5,6,7]. Ethosomes were discovered and developed by research [8]. Specially designed vesicles able to allow transdermal delivery are non-invasive delivery carriers that allow the drug to reach the deeper skin layers and possibly the systemic circulation. They are soft, malleable vesicles, which actively, enhance the delivery of entrapped   drugs.   Ethosomes   are   composed mainly of phospholipids, high concentration of ethanol (20-45%) and water. Due to ethosomal high malleability, it may permeate through human skin. It has been proposed that the high concentration of ethanol fluidizes the ethosomal lipids and stratum corneum lipids, thus allowing the soft malleable ethosomes to penetrate the skin layers. The size range of ethosomes varies from tens of nanometers to micrometers [5-9].

All the reagents used were of analytical grade.

Derivatised neomycin sulfateethosomes was prepared by hot method introduced by Touitoui et al 1997. The ethosomal system of neomycin sulfate was comprised of 0.5 % drug, 1–3 % w/v soya phospholipids (SPC), 40–45 %, v/v of ethanol, propylene glycol 10%v/v and water up to 100% v/v phospholipids were dispersed in water by heating in a water bath (40ºC) until a colloidal suspension was obtained. In a separate vessel, ethanol and propylene glycol were mixed and heated to 40ºC and once it reached the desired temperature the organic phase is added to the aqueous one. The drug was dissolved in the aqueous phase. The mixture was stirred at a speed of 700–2,000 rpm, using a magnetic stirrer for 30-45 min to obtain the required ethosomal suspension. The formulations were stored under refrigeration at 4°C [5-6,13,14] (Table 1). 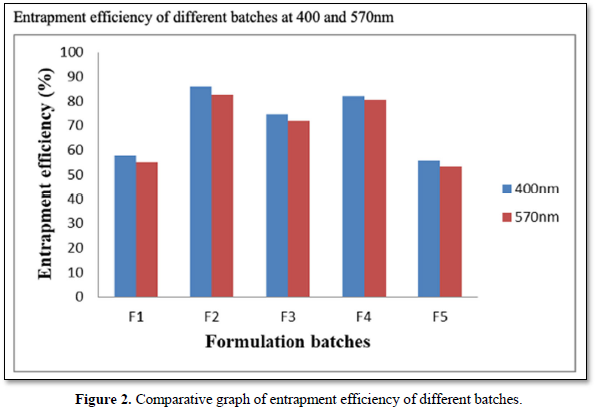 In vitro permeation studies using cellophane membrane
Ethosomal formulations (1 ml) were placed in the cellophane membrane dialysis tubing (molecular weight cut off 12,000, Himedia Labs, India), both the ends of which were sealed and suspended in a beaker having 100 ml acetate buffer pH 5.5 at 37±1°C. The buffer in the beaker was stirred with a glass rod at 45 min interval and samples were collected at 2, 4, 6, 8, 10, 12, 18 and 24 h time intervals, replaced with equal quantity of fresh buffer and analysed for the amount of drug released using Shimadzu 1800 (Shimadzu, Japan) double beam UV spectrophotometer. 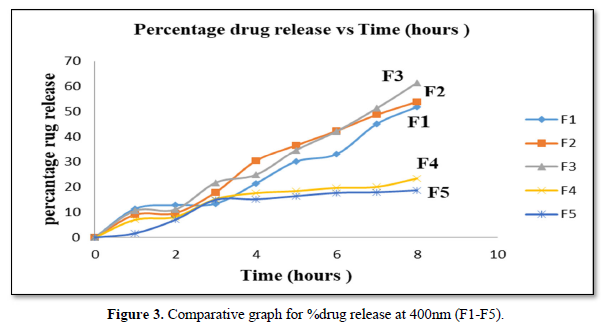 It can be observed from that ethosomal formulations F1 and F2 exhibited a lower minimum inhibitory concentration compared to marketed neomycin sulfate ointment (Neosporin) and the free drug solution of neomycin sulfate (pure drug) (Table 5).

Visualization by scanning electron microscopy showed that ethosomes have a lamellar vesicular structure and this confirms the existence of vesicular structure at high ethanol concetrations. These results are in accordance with those reported by many scientific researchers in literature [6,15,16].
Particle size

The size of the vesicles was increased with increasing phospholipids concentration. Many studies have shown that increasing phospholipid concentration will increase vesicular size slightly or moderately. This could be attributed to the fact that SPC confers greater rigidity to the vesicle consequently reducing vesicle fusion. As reported by several researchers [5,6,17-19].
F5 with 1% SPC and no PG however, showed a greater particle size this can be explained from the absence of propylene glycol in its composition. Scientific research reports have showed that incorporation of PG resulted in reduction in vesicle size. The opposite is true for formulations without propylene glycol due to the absence of interaction between PG with the phospholipid bilayer where the enhancer interpenetrates the SPC hydrocarbon chain allowing more bilayer flexibility and hence higher vesicle size [20-23].
Zeta potential

Zeta potential is an important parameter that affects the aggregation of vesicles and depicts the physical stability of vesicular systems [24]. Ethosomal formulae exhibited high negative charge ranging from (-518.33 mv to -1721.30 mv). Which indicated good stability as the formulated ethosomes do not aggregate rapidly.

The high zeta potential values are due to the SPC, high ethanol concentration and PG. Ethanol provides a net negative surface charge, SPC provides a greater rigidity to the layers and reduced likelihood of vesicles fusion and carry a negative charge likely due to ionization of phosphate group resulting in a high negative charge [17]. Further studies have shown that PG induces a transition in the charge of the vesicles to more negative values [5-7, 25-26].

PDI value helps in determining whether the suspension is mono-dispersed or poly-dispersed.  The PDI value lies between 0.00-0.5 indicating that formulated suspension was homogeneous ethosomal vesicular system [6-9, 27,28].

When SPC concentration increased, there was increase in drug permeation but when SPC concentration exceeded 2% w/w there was a subsequent decrease in permeation of neomycin sulfate from ethosomes. These results indicate that if the percentage of SPC exceeded 2%w/w, bilayer deformability of vesicles occurred with subsequent reduction in permeation drug from ethosomes. This is also similarly reported by other studies [5-9,27,28].

ForulationsF1 to F4 containing showed an increase in drug permeability compared to F5 expalining the permeation enhancing effects of PG by increasing permeability of vesicle through biological membrane due to synergistic effect with ethanol on bilayer of the vesicles. [12-16,33,34].

The rationale behind this work was that a permeation enhancing carrier could facilitate the transport of antibacterial molecules through the two biological barriers: stratum corneum of the skin and bacterial membrane/cell wall.

It was observed that on storing the ethosome formulations for 45 days there was no significant decrease in the drug content and presented no changes in visual appearance or aggregation. These results prove the stabilizing effect of higher zeta potential provided by the formulation composition [33-35]. However, the encapsulated drug tends to leak out from the lipid bilayer structure during storage hence the slight observed changes [5-9, 15-18,30-36].

The rationale behind this work was that a formulated permeation enhancing carrier could facilitate the transport of antibacterial molecules through the two biological barriers: stratum corneum of the skin and bacterial membrane/cell wall. Results from the evaluation of formulated ethosomes particle size, zeta potential, entrapment efficiency, invitro drug release, microbiological assay and stability studies fully satisfy the rationale behind this work. It can be concluded that the prepared ethosomes can act as an ideal vesicular carrier for transdermal delivery as they are non-staining and easy to prepare compared to neomycin ointment formulations.

I am thankful to Mr Narinder Singh and all other faculty members for the inspiration, help and suggestions received beyond evaluation.